Tuesday, April 15, was a rainy and windy day. Winter trying to slide back in for a final run. It was a good day to finish up your taxes. But it was an even better day to honor America’s first baseball hero, James Creighton. It was Jim’s 173rd birthday.

So, who was this James Creighton? Chances are you have never heard of him. Here he is:

And here’s how we described Jim on the bronze plaque that we have just unveiled at his grave:

Jim Creighton’s monument at Green-Wood was put up soon after his tragic death (more on that below) in 1862. Here’s a photograph of that monument, taken in 2012, on the 150th anniversary of his death:

Note the downturned bats on the corners of the monument; these are the baseball version of a Pagan symbol, the down-turned torch, symbolizing that the line of descent was continuing (the flame on the torch is still lit) though the torch is pointed down to show a state of mourning.

And here’s a detail of the central design on the front of the monument:

In fact, Jim Creighton’s grave marker may well have been the first baseball-themed monument anywhere. In 1866, when Jim Creighton’s former team, the Excelsiors of Brooklyn, hosted the Washington Nationals, both teams came to Green-Wood to pay their respects at Jim’s grave. Grass was clipped for souvenirs. It was a pilgrimage to the first Monument Park. Take a look at Monument Park at Yankee Stadium; these bronzes to Yankee greats are mounted on granite cut in the shape of a cemetery marker:

Now, look closely at the top of the monument in the photograph above, taken in 2012 of the historians and re-enactors around the Creighton monument. The monument has a flat top–it seems to end without a finishing touch, without a cap or top. Well, that’s because the original top had somehow, perhaps early in the 20th century, disappeared without a trace. Here’s a photograph of what the monument used to look like:

We–Tom Gilbert, a baseball historian who lives in Brooklyn, myself, and Richard Moylan, Green-Wood’s president–thought it would be great to restore that carved-marble top–with its lemon-peel baseball–the style of baseball, sectioned by stitches the way you would cut a lemon wedge, with which Jim Creighton had pitched.

So, we decided to do what we could to replace that marble top. I went out and took measurements so that we could determine the appropriate dimensions for the replacement piece:

After two years of fund-raising baseball trolley tours, and a big fat check from Keith Olbermann of ESPN, we contracted with Matthews Cemetery Products and their Everlasting Granite Company division to hand carve a replacement top. Dan Cassin, a field sales manager at Matthews, took a great interest in this project, and made every effort to get it right. Here’s the photograph Dan sent me of the hand-carved marble, made to match the original as closely as possible:

So, on Tuesday, it was time to unveil Jim’s restored and improved grave site. On the way out to Creighton’s grave, Tom Gilbert, John Thorn, and I led a trolley tour of Green-Wood to the graves of baseball men who were associated with Jim Creighton: Henry Chadwick, dubbed the “Father of Base Ball” by President Theodore Roosevelt and a member of the Baseball Hall of Fame’s first class in 1938, who had been called in to determine if Creighton’s speedball was legal (he ruled that it was), James Whyte Davis, a contemporary of Creighton’s and a player for the New York Knickerbockers who was buried in his baseball uniform, wrapped in the Knickerbockers’ flag, Duncan Curry, whose gravestone declares him “Father of Baseball,” Joseph Pinckney, who played in the famous Fashion Race Course matches of 1858, and Asa Brainard, who succeeded Jim as the star pitcher for the Excelsiors. In all, Green-Wood has interred across its grounds more than 200 men who played a role in the development of the National Pastime.

At Jim’s grave, I spoke about Green-Wood as a sculpture garden, with recent additions of the “Angel of Music,” “The Greeter,” and “Civic Virtue.” I paid tribute to Green-Wood’s Restoration Team, led by Frank Morelli, which does remarkable work keeping the cemetery’s monuments in good shape, putting heads and wings back on angels, casting replacement parts, and which installed the new marble top atop Jim Creighton’s monument. I also talked about the area of Green-Wood where the Creighton monument stands, with the adjoining Volunteer Fire Department’s lot, purchased in 1848, Chief Harry Howard of the Volunteer Fire Department right across the street, and the lot of the Americus Six Volunteer Fire Company, purchased by none other than Boss Tweed, just down the road.

Baseball historian Tom Gilbert then spoke about Jim Creighton’s tragic death, at the age of 21, from a strangulated intestine. As Tom told it, it appears that Creighton had a congenital condition, an inguinal hernia, which, aggravated by twisting from pitching and hitting, seems to have killed him. Tom spoke of Jim as baseball’s first martyr, and told the story (perhaps a myth) of how Creighton, in his final at bat, hit a home run, raced around the bases, then collapsed at home plate and died a few days later.

Then baseball historian Eric Miklich, wearing the hat and jersey of the Brooklyn Excelsiors, talked about the baseball revolution Jim Creighton had brought about. Before Creighton came along, pitchers were little more than servers, lobbing the pitch where the batter wanted it. But Jim Creighton was a very competitive and talented fellow, and would have none of that. He challenged the batter to hit his pitch, forever changing the game.

Major League Baseball’s historian, John Thorn, then talked about Jim Creighton’s historical importance, describing him as having “given his life for baseball.” John continued, “If we were to honor people there (in the Baseball Hall of Fame) for their contributions to the game and their importance to the game, I think Creighton would have a very good case for being there  . . . Creighton may be the most important figure in the history of baseball who is not in the Hall of Fame.”


And here’s the new lemon-peel top, with Eric Miklich, in an Excelsiors cap and shirt, holding a lemon-peel baseball:

And here is a detail of the new top, in place:

And a close-up of the lemon-peel baseball:

It was a good day for Jim Creighton, 173 years later. Happy Birthday, Jim! 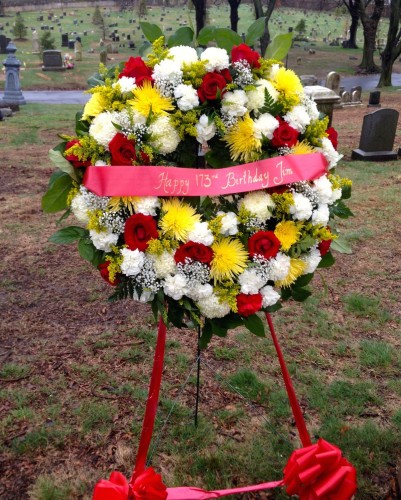 Update: And this very late breaking news from John Thorn, 151 years after James Creighton’s death: Danny Conroy has just found James Creighton’s death certificate on Ancestry. It was filed under “James Crughton”–someone understandably mistook the ei for a u–this is quite the detective work by Danny to find it!