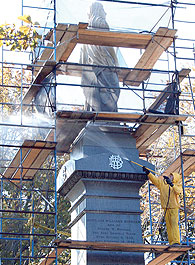 Two more significant monuments have been restored recently by The Green-Wood Historic Fund. The monument to William Wheatley, co-producer of the first American musical, The Black Crook (1866), and also the theatrical agent for an actor by the name of John Wilkes Booth, was recently restored by Aegis Restauro. That company, whose principals are Zbigniew and Joanna Pietruszewski, also did the recent work on the Henry Chadwick (“Father of Baseball”) monument at Green-Wood.

Thanks to Dale Alan Zurbrick, retired drama and music director of Glen Cove High School, who continues to act in and direct theatrical productions, for arranging the funding for this preservation work. And, great appreciation to Peter B. Burnham, great grandson of Gordon W. Burnham, for the money he collected from family members so that the granite angel by John Moffitt (who has many of his sculptures scattered throughout Green-Wood) could be cleaned.

The Burnham family lot, surrounded by an extraordinary granite curb, is located on Battle Hill, just south of the Plateau, in a very early section of the cemetery. Gordon W. Burnham was a patron of the arts and a sponsor of sculpture in Central Park and at Green-Wood. It is appropriate that his family has carried on this tradition with its gift to restore this lot. 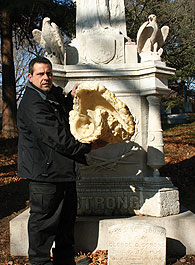 The Historic Fund’s Preservation and Restoration Department has completed restoration work on Civil War general George Crockett Strong’s memorial. Gen. Strong (1833–1863) commanded a brigade at Morris Island, South Carolina, that included the 54th Massachusetts Infantry, a regiment of black soldiers and white officers which would be immortalized in the 1989 Oscar-winning movie Glory.

This elaborate marble monument features a column, cannon, a sword and eagles. More than a century ago, Green-Wood’s first historian, Nehemiah Cleaveland, wrote that the Strong monument had been poorly constructed. Since then, several of the original eagles, placed on the corners of the lower part of the monument, have deteriorated. Frank Morelli (pictured), Green-Wood’s manager of preservation and restoration, created a mold to cast replacement eagles and they have just been installed, restoring the glory of this memorial. It now once again serves as an appropriate tribute to Major General Strong, who gave his life in the service of his country. Strong is interred in Lot 7204, Section 74.

Green-Wood Cemetery’s main entrance, at Fifth Avenue and 25th Street, opened early in the 1860s. It was probably at that time that the four limestone supports for the entrance gates were put in place. Almost a century and a half later, they have been taken apart and put back together by Jurgen Scoda. 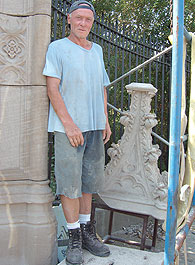 Scoda (pictured) certainly has plenty of experience with such projects. Originally from Berlin, Germany, where he attended art school, then apprenticed to a stone mason and a stone carver, Scoda worked for 15 years in Germany, then came to New York City 20 years ago. He has worked on many of New York’s most famous buildings, including the Cathedral of St. John the Divine, where he carved a Corinthian capital for the Indiana State Library, and has worked on the gate carvings at Planting Fields State Park on Long Island. Self-employed, he even restored the façade of the building where he lives, on East 12th Street in Manhattan.

According to Scoda, almost a century and a half of exposure to the elements caused the iron rods in the Indiana limestone of Green-Wood’s gates to rust; the rust then expanded, which in turn cracked the limestone. Scoda took the limestone apart, removed the iron and replaced it with steel (which will not rust), then epoxied the pieces of limestone together and reset them. Now, hopefully, they’ll be good for another century and a half or more. 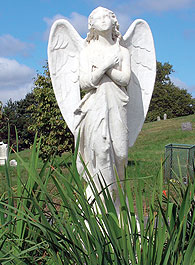 Cleaning up the carpenters’ shop in preparation for building repair the spring of 2006, a Green-Wood crew discovered a damaged white marble sculpture of an angel. The Restoration Department, headed by Frank Morelli, adopted the angel as a project and dubbed her the “Orphan Angel” because no current staff member knew her origin.
After extensive repair to her missing wings and ankle by Morelli and assistants Bogdan Kubiszowiski, Sylvester Jedrych and Lurita McIntosh, our adopted orphan now stands proudly at the edge of Green-Wood’s Valley Water.