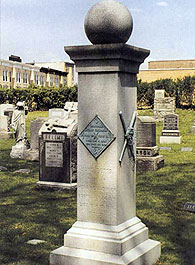 
The bronze plaque in the form of a baseball “diamond” featuring home plate and bases remembers Henry Chadwick as the “Father of Baseball,” a reference attributed to President Theodore Roosevelt. Born in England and coming to America as a boy, the newspaperman made his home in Brooklyn and served as the country’s first baseball editor at The New York Clipper and later at The Brooklyn Eagle for over 50 years. Chadwick was central to the development of the rules of baseball as we know them today, along with the coining and recording of the unique expressions of the game such as “assist,” “base hit,” “fungo,” “double play,” “error,” “left on base” and many more.

The monument, erected by a committee chaired by none other that Brooklyn’s own Charles Ebbets (also buried in Green-Wood), consists of a gray granite column supporting a huge polished granite baseball, stitches and all! Other symbols of the game ornament the shaft, including sets of bronze crossed bats with a catcher’s mask and a mitt, and the plot is defined on each corner by a detailed granite “base” set realistically in the turf.

In 1938, Henry Chadwick was elected to The National Baseball Hall of Fame at Cooperstown, New York.

The granite column, base, capital and baseball, which stand approximately nine feet in height, were in excellent condition, including sound pointing. The pedestal required general cleaning and removal of bronze stains, while the plinth and two of the four “bases” defining the plot required cleaning and repair of stone spalls. The bronze “diamond” plaque and ornamental bats, mask and mitt were oxidized and required cleaning, refinishing and protective coating. The catcher’s mask, which is modelled full round, has an applied wire face guard that required reshaping and soldering.