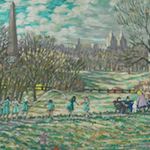 Living in New York City in the early twentieth century, artist Henry Ives Cobb Jr. (1883-1974) was inspired by the energy of the City around him. Working primarily in watercolor and oil, Cobb painted scenes of life in and around Manhattan. Jumping Rope near Cleopatra’s Needle, Central Park, pictured here, is exemplary of Cobb’s style. He whimsically depicts a group of school girls at play in the park on an early spring day. Just beyond them is the New York City landmark “Cleopatra’s Needle,” an Ancient Egyptian obelisk erected in New York during the nineteenth century.Click the image to expand.