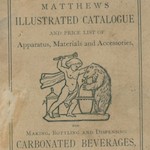 John Matthews (1808-1870), known as “The Soda Fountain King,” is famous for popularizing carbonated beverages in the United States. Though others had attempted carbonation before him, Matthews was the first to create a process that was simple and economical. In 1832 Matthews patented his “apparatus for charging water with carbon dioxide gas.” The apparatus he designed could be kept on a countertop, making it possible for a pharmacist to easily dispense carbonated drinks to the masses. Matthews also introduced the first flavorings for carbonated beverages, contributing to their booming popularity. By the time of his death, more than 500 establishments in New York City alone were using his products.Click the image to expand.