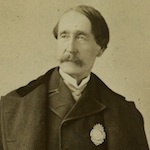 Henry Bergh (1813-1888) was an activist who advocated for the humane treatment of animals. He proposed the first laws protecting animal welfare in the United States. In 1866, just three days after the legislation passed in New York, Bergh founded the American Society for the Prevention of Cruelty to Animals, or ASPCA. Outraged by the blatant and horrific abuse of horses too weary to pull carriages, Bergh made it his mission to protect animals from suffering and injustice. His efforts raised awareness of animal welfare in the United States and by the time of his death 39 states had enacted laws prohibiting cruelty to animals. Click the image to expand.