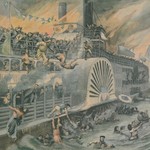 When the steamship General Slocum caught fire in the East River of New York City on June 15, 1904, it claimed more lives than any other disaster in New York City history. An estimated 1,021 of the 1,342 people on board died, largely resulting from inaccessible and ineffective safety equipment. In the aftermath of the General Slocum Steamship Disaster, federal and state regulations were enacted to improve the emergency equipment on passenger ships. Forty-six identified victims of the disaster are buried in Green-Wood Cemetery. Click the image to expand.