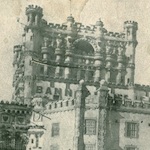 About 50 miles north of New York City, on Pollepel Island in the Hudson River, stand the ruins of what resembles a huge castle. This is what remains of Bannerman’s Island Arsenal, a massive storage facility built by Francis Bannerman VI (1851-1918). A dealer and collector of military goods, Bannerman purchased the island in 1900 as a secure place to store his merchandise. He proceeded to build the world’s largest private arsenal, modeled in the style of a Scottish castle. The arsenal is pictured on the cover of this 1945 catalog, published by Francis Bannerman’s sons, who inherited the business after his death. Click the image to expand.