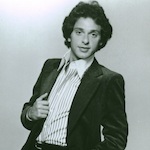 Brooklyn native Paul Jabara (1948-1992) was the songwriter behind some of the most iconic songs of the disco era. Jabara wrote the hit “Last Dance” performed by Donna Summer for the 1978 film “Thank God It’s Friday,” earning him both a Grammy for Best R&B song and an Oscar for Best Original Song. He also co-wrote The Weather Girls hit “It’s Raining Men.” Click the image to expand.