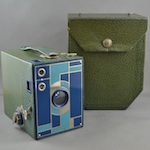 The “Beau Brownie” box camera, pictured above, is one of many products designed by Walter Dorwin Teague for the Eastman Kodak camera company. A pioneer of industrial design in the United States, Teague brought his unique conceptual approach to a variety of special edition cameras for Eastman Kodak during the 1920s and 1930s. Teague believed that even simple household products should have a modern visual appeal. His designs, like that of the “Beau Brownie,” were often characterized by bright colors and art deco patterns. Teague’s restyling of consumer goods was a bold approach that helped to change the course of product design in the 20th century. Click the image to expand.