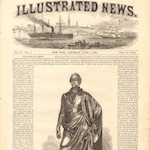 Standing at the center of Green-Wood’s Bay Side Dell is a bronze monument to one of the most illustrious New Yorkers of the nineteenth century – DeWitt Clinton (1769-1828). As a New York City Mayor, New York State Governor and the visionary behind the Erie Canal, Clinton was one of the most popular statesmen of the 19th century. In 1850, Green-Wood arranged to have Clinton’s remains removed from the Little Albany Cemetery and brought to Green-Wood, where an impressive monument would mark his new home. It was a successful marketing tool to bring attention to Green-Wood during its strained early years. The bronze sculpture by Henry Kirke Brown was debuted in City Hall Park in 1853 and made the front page of New York’s Illustrated News on June 4 of that year. Click the image to expand.