Green-Wood’s exhibition, “William F. Mangels: Amusing the Masses on Coney Island and Beyond,” is now open every day between noon and 6:00 p.m. through October 26. Come visit!

Why an exhibition about William F. Mangels? Who was he, anyway? Well, though you may not recognize Mangels’s name, he made vital contributions to the great American amusement park. So, who was William F. Mangels (1867-1958) and why should we care? William F. Mangels was a German immigrant who came to America as a teenager (on the very day the Brooklyn Bridge opened in May of 1883). Trained by his father as a mechanic, he settled in Coney Island, trained, and then started his own business. But it was to be no ordinary business; by the time he was done, he held 50 plus patents and was running the leading manufacturer of amusement park rides, carousels, and shooting galleries in America. His most famous ride was The Whip–there were 500 of them across America and around the world, including the streets of Paris and London, and as far away as New Zealand.

Ok. So an interesting fellow–and who doesn’t love Coney Island and amusement parks–by why have an exhibition about him at Green-Wood? Well, first of all, he is interred at Green-Wood and is one of our most fascinating permanent residents. Second, the Green-Wood Historic Fund has collected Mangels material over the years–including a Pony Cart, a Speed Boat, original blueprints, posters, post cards, targets, and more. Third, this year is the 100th anniversary of Mangels’s invention of his most famous ride, The Whip. Given all of this, more than a year ago I went to Green-Wood’s president, Richard Moylan, and suggested we do an exhibition about Mangels. Mr. Moylan liked the idea and gave me the go-ahead. But, I must say, I had no idea how well things were going to fall into place with this exhibition.

I started researching online. I discovered several Mangels rides for sale. I also found a Mangels shooting gallery for sale in Illinois. That intrigued me, and to make a long story short, I bought it so that we could display it in the exhibition. Jerry Watkins, who sold it to me, flew into New York a couple of weeks ago and, with his son-in-law Bill, and they put it together so that you can enjoy it. It is a fascinating piece–22′ 4″ long, weighing over a ton. 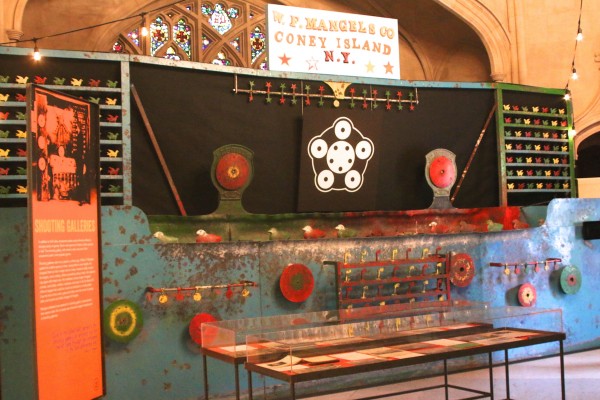 The Pocono Shooting Gallery. It has been the big hit of the exhibition–and not just because it is huge. Visitors get to ring the gongs behind the bullseye targets, check out the mechanism behind the gallery that moved the targets, and play with the pipe target reset lever. Come try it!

Jerry and Bill worked from a photograph and reasoned out where the hundreds of angle irons, brackets, and sprockets went. It was amazing to watch them in action.

Then I discovered that Columbia University’s Frederick Fried Coney Island Collection at the Rare Book and Manuscript Library contained hundreds of original plans and photographs relating to Mangels. And I found Lisa Mangels Schaefer, the great granddaughter of William F. Mangels, who ulitmately loaned us, on behalf of her family, many great objects and photographs. 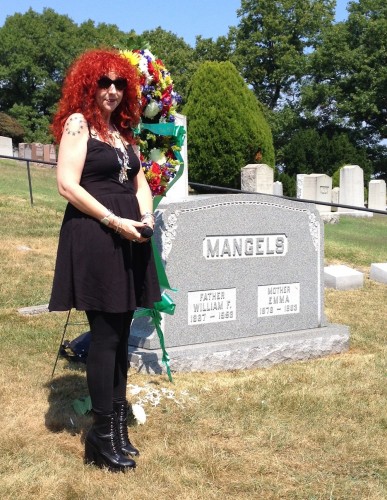 Lisa Mangels Schaefer, great granddaughter of William F. Mangels, at the the Green-Wood gravestone of her great grandfather and great grandmother. Notice the tattoo on Lisa’s right shoulder; it is a Mangels shooting gallery target.

Charles Denson, executive director of the Coney Island History Project, agreed to co-sponsor the exhibition and generously shared his unlimited expertise and his many contacts. Collectors stepped up: Sanford Smith let me pull the bullseye target below off his office wall and John Manoogian shipped us, from California, the two red targets below as well as eight other targets.

On the right side of the curio cabinet, which was made by Green-Wood’s metal workers, the three targets rotate above miscellaneous targets and a Speed Boat.

Ken Rubin, an avid collector, saw an article in The New York Times about the upcoming exhibition, called me, and wound up lending us a half dozen great pieces.

And Brooklyn artist Tim Clifford, who just so happened to be working on a project to draw shooting galleries, contacted me and offered to create original art inspired by Mangels shooting gallery targets. Four of his targets are in the exhibition (you can see one of them in the photograph of the shooting gallery above–the black and white drawing at the center of the gallery), plus a great Mangels sign that he painted on very short notice (which you can see atop the Pocono Shooting Gallery in the photograph above).

Here are a few more images of the exhibition: 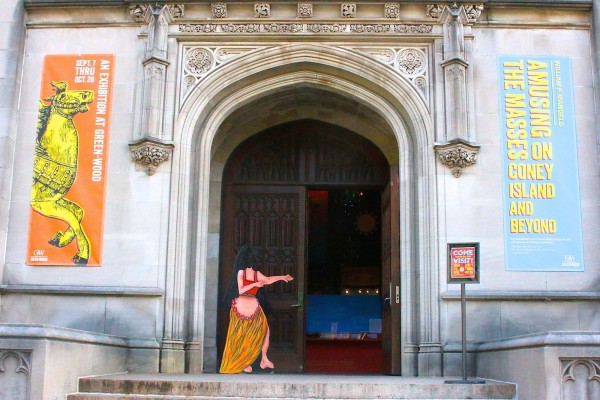 The entrance to the exhibition, with banners, Hula Dancer (have your photo taken as a Hula Dancer or head inside, pay your admission, and be photographed as a Strongman), and admission sign.

Of course, you have to see this exhibition in person in order to hear the clang of the gong targets, to enjoy the carousel music, to see the five sets of video and slide shows (one for each section of the exhibition: The Man, The Company–with a fascinating interview of Lisa Mangels Schaefer, Shooting Galleries–with videos of two by Mangels in action today, Rides–including archival footage of the Human Roulette Wheel spinning people around, circa 1940, The Whip–Mangels’s most popular ride, and Carousels–the B & B at Coney Island, the carousels at Playland in Rye, New York–all by Mangels).

Here’s more of what you’ll see as you enter the exhibition: 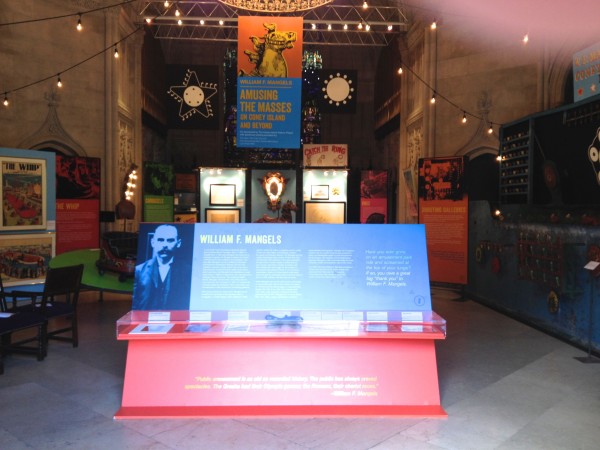 The overview of the exhibition, from the entrance. Much color, much fun! 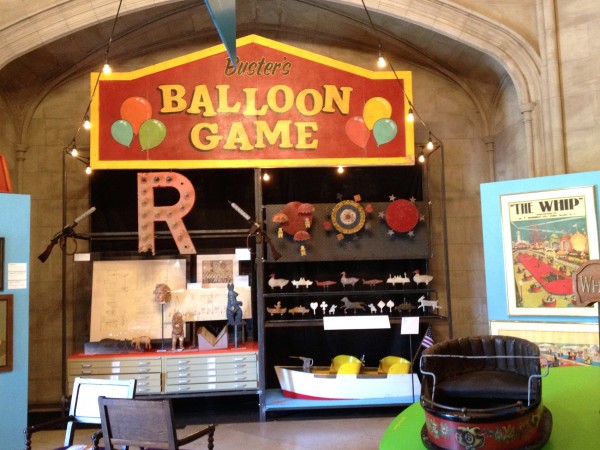 The curio cabinet is chock full of Mangels items: targets, 10 flat files filled with plans, blueprints, patents, and drawings, as well as the Mangels Company’s account book from 1908 to 1916, a rabbit mold, and the original plans for Palisades Park’s Wave Pool (typical Mangels–asked to invent a Wave Pool, he didn’t stop until he created one that could be set to make 3 different types of waves)! 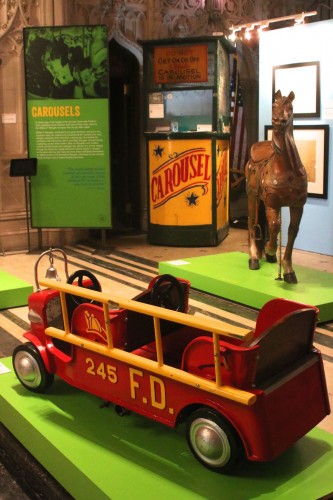 Archigrafika, our graphic designers, did a fantastic job on the color of the exhibition. It looks like Coney Island and fun! Notice the “245 F.D.” on the fire engine; that is Mangels’s tribute to his local fire company, Engine 245, that was just down the street from his factory. 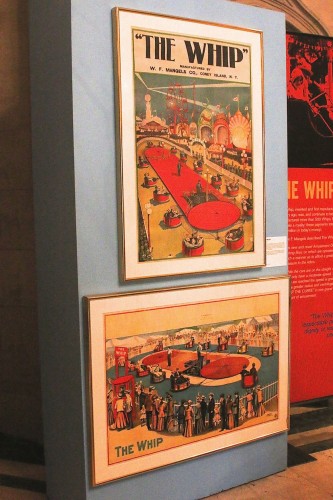 Two great Whip posters from about a century ago. Courtesy of Ken Rubin. 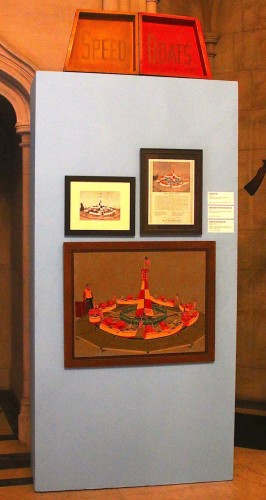 It was very exciting to be able to bring related items together for the first time: the silkscreens that were used to paint “SPEED BOATS” on the ride, the photograph of the speed boat ride from Columbia University, an advertisement for that ride based on that photograph, and a painting by William Mangels, Jr., dated 1956, of the exact same scene.

Admission is to the exhibition is free for Green-Wood Historic Fund members; a very modest $5 for non-members, to help pay our docents.

Early reaction has been overwhelmingly positive. Brooklyn Borough Historian Ron Schweiger was there as the exhibition opened and wrote in our guest book, “Wonderful exhibit!!” A visitor from Los Angeles: “Terrific, thank you!” Mark D. Phillips of southbrooklyn.com penned “fabulous.” Another visitor called it “a walk down memory lane.” Some remembered these rides from their childhoods; one remembered grabbing the brass ring and getting a free ride on Mangels’s B & B Carousell. And one said of the exhibit: “amazing . . . on a whole different level.” One wrote: “loved it–got teary–want more–thanks.” And finally: “Wonderful exhibit. Brought back many memories.”

This exhibition has been a remarkable journey, with so many people giving of themselves to make it happen. Art Presson, with whom I worked on 6 earlier exhibitions, did a brilliant job of exhibition design. Archigrafika–Michael Gerbino, Holly Gerbino, Mike Carsten, and Gregory Goings–worked tirelessly on the graphic design and planning. Gerbino told me that he had a warm place in his heart for Coney Island and would do everything he could to make this exhibition a great tribute to his grandparents:  years ago, his grandfather approached the woman he would marry on Coney Island, told her that she “was the most beautiful pebble on the beach,” and the rest is family history. Tony Cucchiara, professor emeritus at Brooklyn College, was our archivist–helping with handling, layout, and mounting of paper objects, as well as contacts with Luna Park, Deno’s Wonder Wheel, and more. Stacy Locke, our registrar, has diligently kept track of the hundreds of items that are in the exhibition. Lisa Alpert supervised our fundraising and Chelsea Dowell coordinated Kickstarter postings and premiums. It was a real team effort. William Rivera, Green-Wood’s do-it-all worker, figured out how to motorize three rotating targets. Dominick Lanzi and Vincent Joseph, ironworkers extraordinaire at Green-Wood, did an amazing job fabricating the very large curio cabinet, display tables, and mounts. Dempsey Rice, our videographer, shot at the Elizabeth Street Gallery, Rye Playland, the B & B Carousell, and Deno’s Wonder Wheel, then did a wonderful job of editing this footage and integrating it with archival footage. Dennis and Steve Vourderis of the Wonder Wheel could not have been nicer, lending us two fire engine ride cars, a balloon sign, and more. And when, on a tour in honor of the opening of the exhibition, we put a microphone in Dennis’s hands, he rhapsodized about Mangels’s rides, two of which are still running at Deno’s 65 years after they were made. We were honored that the American Folk Art Museum lent us a great carousel horse, carved by Marcus Illions (whose business was right across West 8th Street from Mangels’s) and were thrilled that collector Ken Rubin lend us his Illions carousel carving to go with it. 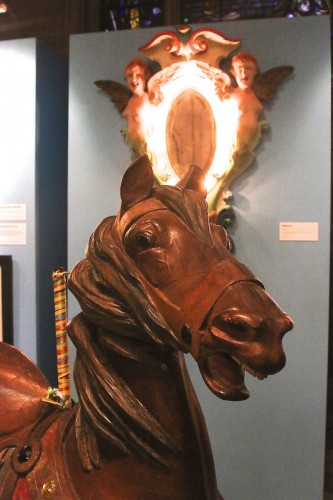 Dominick Speziale, whose yard is filled with ride cars, lent us his Speed Boat. And the Sharfsteins generously let us display their painting, by William F. Mangels, Jr., of the Speed Boat ride. Kenneth Puccia and the staff at Rye Playland opened up an hour early so that we could ride, and videotape, the four Mangels rides still in operation there. And thanks to Luke Spencer, a cameraman on the History Channel’s “Pawn Stars,” who donated his time to create our Kickstarter video. Colin McDonald did a great job setting up our iPads and creating our slide shows of archival photographs–with, as requested, “Ken Burns effect.” Jim Lambert, dedicated volunteer, did it all–cleaning and polishing and helping wherever he was needed–although, I must say, he did refuse to be photographed squeezed into the kiddie Whip car. And thanks to our 197 Kickstarter backers, Luna Park, and City Councilmember Carlos Menchaca, the Careys and the Russos, for generous funding.

And just one final note. 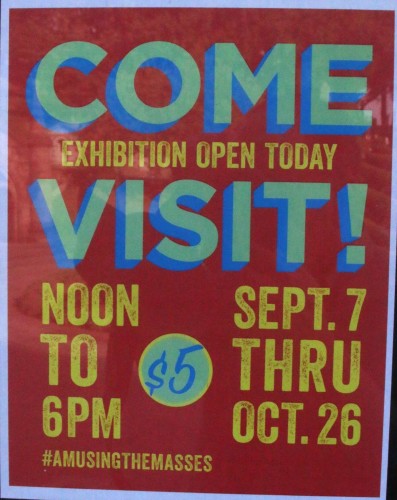