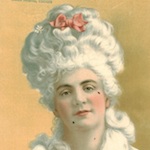 Ada Rehan (1857-1916) was a renowned American actress of the late nineteenth and early twentieth centuries. Born Delia Crehan, the actress adopted her stage name after being misbilled as Ada C. Rehan. She gained notoriety for her performances in classic comedies. Rehan is pictured here in costume for one of her most famous roles, Lady Teazle in Sheridan’s The School for Scandal. In 1891, the dramatic critic William Winter praised Rehan’s acting ability. Of her performance as Lady Teazle he wrote, “No previous representative of the part, upon the American stage, has dressed it so richly as it was dressed by Ada Rehan.” Click the image to expand.