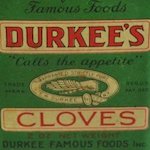 Eugene W. Durkee (1850-1926) was a successful merchant of condiments, spices, and sauces. His father, Eugene R. Durkee, founded the Durkee company in 1861 to market his “secret recipe” dressing for salads and meats. Durkee quickly expanded, however, to manufacturing various sauces, condiments and spices. With factories in both Brooklyn and Queens, the Durkee Company was quite successful and well known in New York City. Pictured here is a tin in which cloves were sold, “One of Durkee’s Famous Foods.” Eugene W. Durkee went on to work for the federal government in 1906, hired to write federal standards for spices and extracts. Click the image to expand.