Yes, it was indeed quite a weekend.

Our Memorial Day Weekend was in preparation for what seems like forever; it was actually only a year.

And it was an amazing and moving experience. Since 2002, hundreds of volunteers have been identifying Civil War veterans at Green-Wood. We’ve written a biography for each of the 4,600 of them, and have gotten 2000 Veterans Administration gravestones for those in unmarked graves. We’ve even found 75 Confederates!

On Saturday, we opened our Civil War multimedia (two slide shows and 3-D Civil War photographs are featured) exhibition, wonderfully designed by Art Presson, our superintendent of the grounds who, in a former career was the exhibition designer at ICP) in our Historic Chapel: “Honoring Their Sacrifice.” It has some great items–pieces from our collection and borrowed from others, many of which are on display for the first time. The exhibition will be open through June 12–check our website for hours. Don’t miss it!

Since 2011 began, volunteers have been working at mapping each of these veterans’ grave sites. On May 14, about 150 volunteers marked each of those graves with an American flag. Then, on Sunday, a similar number of volunteers put lit luminary candles on each of their graves. That night, we staged the Grand Procession. Re-enactors in uniform and costume stood along the route.

A squad of cavalry horses led the way.

The luminaries marked the graves of our Civil War veterans. 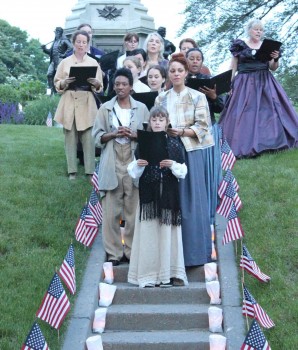 Our chorus, led by Marge Raymond, sang “The Battle Hymn of the Republic” on Battle Hill at Green-Wood.

And musicians performed Civil War tunes along the route. A Civil War cannon delivered loud booms and flashes of flame.

A slide show of the faces of our Civil War veterans was projected onto the side of our Historic Chapel.

And the luminaries burned until dawn and beyond. All in all, it looks like we had about 1,000 people, young and old, take part in the Grand Procession.

The next morning, on Memorial Day, we staged our March of Honor. See image at the top of this post.

Again re-enactors joined in. But we also had an Army color guard and descendants of our Civil War veterans, who commemorated the service of their ancestors by describing their service.

Descendants came in from all far and near: one from England, several from California, and many from the tri-state area.

And, of course, Denny Pizzini and his Winslow’s Battery were, as always, a great hit with their artillery fire.

That was followed by Green-Wood’s annual free Memorial Day concert. This year it has a very special theme: the Civil War.

All in all, it was quite a weekend. It got tremendous press and media coverage for the weekend. CNN was there; they were about to go live on a series of pieces from Green-Wood, but we were preempted by President Obama’s speech from Joplin, Missouri. Click here for the piece that CNN did run. And here’s NY1’s piece. The Associated Press ran a print article, a gallery of photographs, and this video, about our Civil War Project. And here’s a great piece, by Seth Wenig of the Associated Press, on our Civil War Project and some of our wonderful volunteers. Enjoy!

Thanks to my son, Jonathan Richman, for the wonderful photographs that are part of this blog entry. Great work, Jon!

3 thoughts on “What A Weekend!”