In August, Green-Wood’s wonderful archivist, Theresa LaBianca, received a telephone inquiry concerning a grave in Public Lot 38325. Theresa went into the back of the office, opened the appropriate drawer, and starting flipping through the index cards for the graves in that lot. As she did so, she noticed a card with these notations: “38325, Grave 980, Purchased Jan 5, 1961 by: United Air Lines, 5959 South Cicero Ave., Chicago, Ill. 3 Caskets of Fragmentary Human Remains.” Theresa, who has been working at Green-Wood since 1977, and has been the cemetery archivist for years, is always looking for a new discovery. So she photocopied this card, went back to the phone to answer the inquiry, then turned her attention to solving Green-Wood’s latest mystery.

Theresa discovered quite a story. On December 16, 1960, United Airlines Flight 826 and Trans World Airlines Flight 266 collided over Staten Island. The United flight then tried to make it to LaGuardia Airport for an emergency landing, but crashed in Park Slope. Ten brownstones near the intersection of Seventh Avenue and Sterling Place were set on fire, as were a funeral home, a laundry, a delicatessen, and, strangely enough, the Pillar of Fire Church. Eighty-four people on that flight died, and six people on the ground also were killed. The TWA flight crashed in Staten Island and forty-four passengers and crew died there. The investigation of this disaster marked the first time that an airplane’s black box data recorder was used to provide details of what had happened.

In an era before DNA identifications were possible, three caskets of “Fragmentary Human Remains” were filled from the Park Slope crash site and were buried in a grave in lot 38325 that was purchased by United Airlines. No marker was placed on the grave.

On Thursday, December 16, the 50th anniversary of this deadly crash, at 10:00 a.m., Green-Wood will dedicate a memorial to the victims of this crash. The memorial, designed by Superintendent of the Grounds Art Presson and other Green-Wood staff, will feature a grove of one hundred Quaking Aspen trees, alcoves, benches, and a path, on a slope adjoining lot 38325. An eight-foot inscribed granite monument, designed by Vice President for Operations Ken Taylor, also will be unveiled. If you would like to attend this commemoration, please click here to reserve a free ticket.

UPDATE: Here is James Barron’s dramatic account of the disaster in The New York Times, published on December 12, 2010. And here is the story in the December 13, 2010 Columbus (Ohio) Dispatch about some of the passengers who died and their families that survived them. The New York Post has just run this story of the crash, including the recollections of a second-grader at the time, Richard Moylan, who grew up to be the president of Green-Wood Cemetery, and whose idea it was, almost fifty years later, to design an appropriate memorial to the crash victims. Here’s the Associated Press story that has just gone up across the country. And here’s a fascinating story, by Andy Newman in The New York Times, on the physical manifestations of the United Airlines crash that remain in Park Slope today. 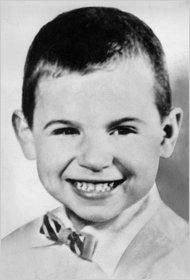 This is a very moving piece, published in The New York Times and written by William Baltz, “A Little Brother Remembers,” in which he writes about his older brother, Stephen. Eleven-year-old Stephen Baltz became the story in the wake of the crashes; he was the only person who was taken alive from the scenes of the crashes. Though badly burned, he clung to life for a day, then succumbed to his injuries. He died at Methodist Hospital, and a plaque there memorializes him. In that plaque is the change that he had in his pocket when the plane crashed. His parents left that change in a donation box at the hospital.

UPDATE ON THE UPDATE: Yesterday, December 16, 2010, was the 50th anniversary of these plane crashes. A commemoration was held at Green-Wood Cemetery, near the spot where three caskets of unidentified remains were interred in a grave purchased by United Airlines on January 5, 1961. It was quite an event. On the left below is the new monument, placed at Green-Wood, as it is being unveiled by Brooklyn Borough President Marty Markowitz and City Councilman Vincent J. Gentile. Many individuals were on hand who were at the scene of the crash fifty years ago. Family members of quite a few of the victims also were present. 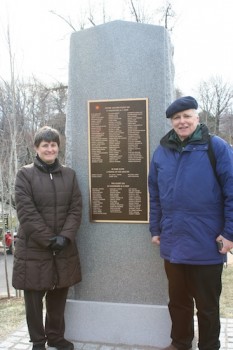 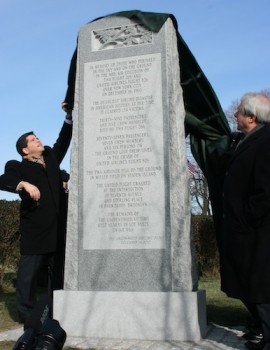 On the right above, standing beside the back of the monument, which lists the names of victims  who died that day, are Marty Ross-Dolen and Craig Ewart. Garry and Mary Myers, Marty’s grandparents, were on their way aboard TWA flight 266 from Columbus, Ohio to New York for meetings about their family business, Highlights for Children, when their plane collided with another, then crashed. Marty, fifty years later, flew into LaGuardia Airport from Columbus for the commemoration at Green-Wood; she followed the path, in the air, that her grandparents had taken fifty years earlier. Craig’s father, Cyril, was also an executive with Highlights for Children. Craig was seventeen years old when his father died; he is now a psychology professor at Syracuse University. 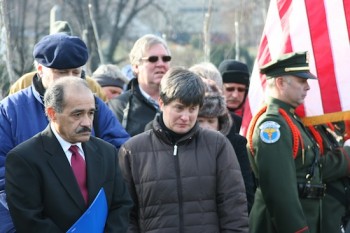 The man at front left, holding the blue folder in this photograph, is Ray Garcia. Ray is the author of Sterling Place, a book about the tragic collision of these two planes. Ray, who over the years has spoken with many of the victims’ family members, as well as with many who were on the ground in Park Slope when the United flight crashed, talked at the dedication services about the meaning of this tragedy and read e-mails from two families of the victims, including the Baltz family. 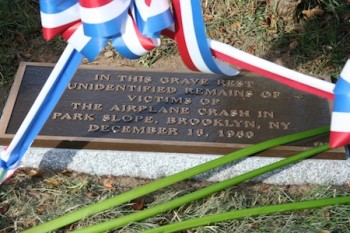 This is the bronze that has been placed on the previously-unmarked grave at Green-Wood where the human remains were interred early in 1961. It is just a few feet away from the new granite monument.

Finally, here’s a very well done video report by Roger Clark for NY1, and click play below for two slideshows of additional photos from the ceremony.

22 thoughts on “Remembering A Disaster’s Victims”