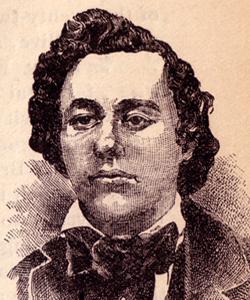 December 16 is the 151st anniversary of the execution of John E. Cook by hanging.

Born in Haddam, Connecticut, Cook moved to Brooklyn to study law. A follower of the famous abolitionist John Brown, he went to Kansas in 1855 where he was the only man to reach the rank of captain in Brown’s Kansas Provisional Army who wasn’t one of Brown’s sons. Cook took part in many raids in Bloody Kansas against slaveholders. He often did reconnaissance of a town or place, then returned to Brown with intelligence that greatly reduce casualties on subsequent missions. He was also successful in raising money for Brown’s Army from abolitionist bankers in New York City and Brooklyn. In 1858, Brown sent Cook to Harpers Ferry, Virginia, a year before their famous raid, as a spy. Cook took many jobs there including school teacher and river lock-tender, all the time reporting back to Brown on troop and train movements, telegraph wire locations, and information on slaves throughout Virginia. On October 16, 1859, Brown led his raid. But it did not go well, and most of the raiders were captured or killed. Cook escaped to the mountains of Franklin County, Pennsylvania, where he was hidden by the Underground Railroad. But, after a few days, on October 25, 1859, Cook came to the Hughes Furnace looking for food. Unfortunately, that place was managed by a southerner, Dan Logan, who supplemented his income by capturing runaway slaves and returning them to their Southern masters. Logan immediately recognized Cook who was “under medium size, skin as soft as a woman’s, and his deep blue eyes and wealth of blond hair made it easy to identify him.” Though locals made plans to free Cook from custody, a Virginia agent arrived the next day and took him back to Charlestown, Virginia. There he signed a statement implicating leading Northern abolitionists in the planning of the raid on Harpers Ferry (though, in its wake, and after its failure, they had vehemently denied any involvement in it). You can read his confession here.

Though the raid failed to trigger the slave revolt Brown and his compatriots had hoped for, it had a great impact on the runup to the Civil War. Most Northerners felt that Brown was a radical and his raid was a bad idea. But the South reacted so vehemently to his raid that it created sympathy in the North for Brown’s cause, emancipation, and a feeling in the North that Southerners were overreacting.

In late December, Cook and another imprisoned raider, awaiting execution, knocked a hole in the wall of the Charlestown Jail and attempted to escape. Here’s the woodcut that appeared on the front page of Frank Leslie’s Illustrated newspaper of December 31, 1859 (just added to our Historic Fund Collections). However, they had made a big mistake–they wound up inside the prison yard, not outside its walls, and were quickly recaptured. Cook was hanged on December 16, 1859, for his part in the Harpers Ferry raid. His remains were brought back to New York and he was interred in Cypress Hills Cemetery. A few years later, his remains were moved to his brother-in-law’s lot at Green-Wood, section 115, lot 18004.

In May, 2003, at the end of a day in which about 75 volunteers had searched the cemetery grounds for any sign of Civil War veterans, one of the volunteers stopped me and said she had seen an interesting gravestone. She reported that, though it did not appear to be that of a Civil War veteran, the monument was inscribed with something about John Brown’s raid. We immediately drove out to a grave between the Beard Bear and the Civil War Soldiers’ Lot. There I got down on my knees to read this gravestone. As you can see, given its coloring, it is difficult to read. I had passed this spot many times and had never noticed this inscription: “CAPTAIN JOHN E. COOK DIED FOR THE CAUSE OF EMANCIPATION AND HUMAN LIBERTY WITH THE NOBLE PATRIOT JOHN BROWN AT CHARLESTOWN VIRGINIA DECEMBER 16, 1859.”