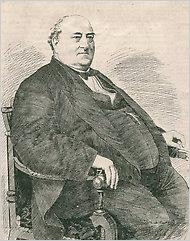 Green-Wood has 561,000 individuals interred across its grounds. Some are fascinating; some, not so much. Of the many characters I have come across in my research on Green-Wood’s permanent residents, few can compete with Isaac Hull Brown when it comes to fascinating lives. Brown was featured in an article this past Monday in The New York Times. So, I thought I would share with you the section of my book, Brooklyn’s Green-Wood Cemetery: New York’s Buried Treasure, that is devoted to Brown. Here it is:

ISAAC HULL BROWN (1812-1880) wore many hats, and all of them were fashionable. He was the longtime sexton of Grace Church, “the most fashionable and exclusive of our metropolitan Courts of Heaven.” As New York’s firs social arbiter, Brown collected intimate information on every household in his parish, and used that intelligence to advise his followers whom to invite and whom to snub. He knew the blood lines, financial affairs, and domestic troubles of everyone in New York Society, and was only too anxious to pass his gossip along.

A hostess contemplating an entertainment event would send for Sexton Brown, and together they would choose the proper guests. Brown then made the arrangements and personally delivered the invitations. When the guests arrived, Brown, in trilby hat and huge overcoat, was on the sidewalk to greet them; for this he was known as “the connecting link between Society and the curbstone.” If the hostess had invited certain guests despite Brown’s disapproval, he greeted those he helped from their carriages with a whispered warning, “Very mixed, very.”

It was Sexton Brown who made arrangements for New York City’s 1860 gala ball in honor of the Prince of Wales. The good sexton also created Brown’s brigade, society’s first male escort service, by compiling a list of presentable young men for hire, who would appear as needed for supper or dance in black swallowtail coast, white vests, and white cravats. His ultimate regret, however, was his limited reach: “I cannot undertake to control society above Fiftieth Street.”

Brown was also in the undertaking and carriage-rental businesses. As he remarked, “The Lenten season is horribly dull, but we make our funerals as entertaining as possible.” Just as in entertainment, funerals had their fashion. As one New York City guide wrote of Sexton Brown:

Fashion does not change more frequently in dress than in the method of conducting funerals in high life. What constituted a very genteel funeral last year would be a very vulgar one this. Cards of invitation are sent out as to a party. Sometimes the shutters of the house are closed, and the funeral takes place in gas-light. The lights are arranged for artistic effect. Parties who have the entrée of fashionable life can tell, the moment they enter the rooms, what fashionable sexton has charge of the funeral. The arrangement of the furniture, the position of the coffin, the laying out of the body, the coffin itself, the adjustment of the lights, the hanging of the drapery, the plate-glass hearse, the number of horses, the size and quality of the plumes on the hearse and team, indicate the style of the funeral, and the wealth and social position of the family. Mourning has a style peculiar to itself, and the intensity of the grief is indicated by the depth of the crape.

One society lady honored stylish and bustling Sexton Brown with this verse:

Of churchyard, ball-room, saint and sinner!

Flying by morn through Fashion’s range,

And burying mortals after dinner!

Walking one day with invitations-

Passing the next at consecrations;

Tossing the sod at eve on coffins;

With one hand drying the tears of orphans,

And one unclasping ball-room carriage,

Or cutting plum cake up for marriage:

Dusting by day the pew and missal;

Sounding by night the ball-room whistle,

A skilled as psalms, at punch, and cricket. 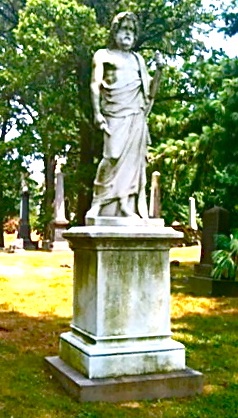 And here’s the sidebar in the book, about Isaac Hull Brown’s curious choice of a cemetery monument. This is an excellent example of a cemetery marker that tells us a great deal about the deceased:

How to explain why Sexton Brown is buried beneath this statue of Pythagoras? It is unlikely that Brown hoped to spend his eternity calculating the length of the hypotenuse of a right triangle. Rather, this unusual, perhaps unique, choice of a monument is in all likelihood related to the belief of Pythagoras (c. 580 b.c.-500 b.c.) in the heavenly destiny of the soul and the possibility that it will rise to union with the divine. Pythagoras considered himself to be semidivine, with knowledge greater than that of others because he could remember his earlier incarnations; he rejected the idea that a human being lives only one life on Earth as the illusion of a lost memory. Salvation, according to his teachings, would be achieved through study of the cosmic order, and knowledge was the path to divinity. The idea that the soul lives in the body but can exist apart from it originated with Pythagoras’s followers. It seems likely that Sexton Brown thought he knew more than anyone else about New York society, and that that knowledge just might be his ticket to heaven. 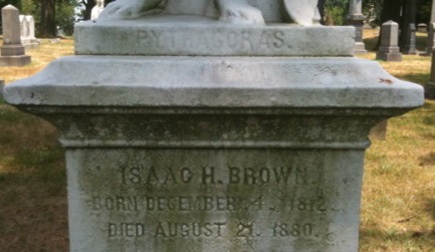 Just in case I forgot to mention it, you can purchase my first book (second edition; I’m very proud of the fact that the first edition, 6,000 books, has sold out!), about Green-Wood Cemetery and many of the fascinating characters interred there, by clicking here.

And, if you’d like to read more about Sexton Brown, click here for the recent New York Times article. 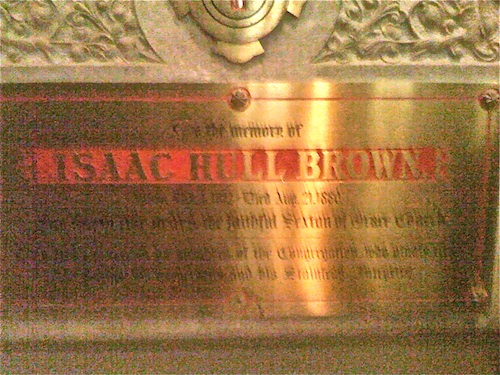 UPDATE: You might think that Sexton Brown, who served Grace Church for so many years, would be remembered there. And he is. Here is a wonderful plaque, on the church wall to the left as you enter, dedicated to his memory. Thanks to Cesar Puello for his photograph.

2 thoughts on “Fashion in Funerals”