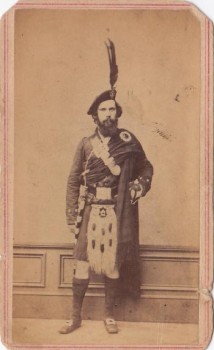 I have been a collector my whole life. I started with baseball cards, then moved on to stereoview photographs of New York City. In fact, that’s how I wound up at Green-Wood the first time. Like all collectors, I would sometimes go to a show and not find what I was looking for. It then became a question of going home empty-handed or slightly expanding the scope of what I was collecting. As I looked for New York City views, I kept coming across views of some place called Green-Wood Cemetery. At one show, about 1982 or so, I decided to buy two stereoviews of Green-Wood, taken about 1860. I still remember one of those views–it showed snow on the ground and on the monuments. I think I paid $20 for it–quite a splurge back then. My first visit to Green-Wood was a result of these purchases. It occurred in 1986. I saw an ad for a tour, led by a professional photographer, of Brooklyn’s Green-Wood Cemetery. I wanted to go on the tour so that I could see the spots I knew from these old photographs. That first visit was an amazing experience–what a great place!

Now, I collect of behalf of the Green-Wood Historic Fund. One of my great pleasures as Green-Wood Cemetery historian is to collect items pertaining to our permanent residents and the cemetery itself. We’ve collected some great things over the years, have had some great donations, and are constantly expanding our holdings.

I recently purchased the above photograph online. The seller noted he thought it was a photograph of a member of the 79th New York Infantry, known as the Highlanders, in uniform. He reported that the back of the carte de visite photograph had “McLellan” lightly pencilled on it. Based on that name, he had concluded that the image was likely Major David McLellan.

I had to do some quick research. I checked the best online source for information on Civil War soldiers, the American Civil War Research Database ($25 for a one year subscription) and found information about Major McLellan. He enlisted on May 29, 1861, at New York City, as a major, and was commissioned into the field and staff of the 79th on June 1. He was discharged on August 10 of that same year and died on July 24, 1867 at the age of 42. I checked the cemetery database and discovered a David McLellan was interred at Green-Wood on July 26, 1867. I then called Theresa LaBianca, the cemetery archivist, and asked her to check the cemetery records; she soon confirmed the David McLellan at Green-Wood was 42 years old, just like the major, and had died on July 24, 1867. A match!

Now, how about what he’s wearing. Does that tell us that this is an officer with the 79th New York? Well, I think it does. There were many unusual regiments raised during the Civil War. There were German units, regiments of chaplains, regiments of tall men only, regiments of Scotsmen. The 79th New York Infantry actually was formed in 1859, before the Civil War, and was designated the 79th New York State Militia after the 79th Cameron Highlanders of the British Army. When the Civil War began, 1000 men, mostly Scots, Irish, and English, were recruited for service. The 79th, to say the least, wore a distinctive uniform, particularly early in the Civil War. The dress uniform consisted of black shoes with, according to Mark Lloyd in Combat Uniforms of the Civil War, “red-and-white checkered knee-length woolen socks;” in the right sock was placed a dirk, a short curved knife that proved tremendously handy in hand to hand combat. Now, here’s a detail of McLellan’s photograph (on the left) and here’s a drawing I found in Lloyd’s book, of the leg of a soldier in the 79th. Notice the shoes–they do look “uniform.” Also notice the sock McLellan is wearing–you do see the same checked pattern as in the red and white drawing at the right. And notice the dirk sticking out of the top of McLellan’s right sock; that was also part of the 79th’s uniform. The uniform of the men of the 79th also included kilts and a white hair sporran (Scottish Gaelic for “purse,” it served as a pocket). Kilts and a white hair sporran in the McLellan photo: check and check. Now, it appears that the men of the 79th also wore a Glengarry hat, traditionally boat-shaped. That is clearly not the case with McLellan. But, particularly early in the war, there was some free-lancing of uniforms, particularly by officers, which may explain the variation here. 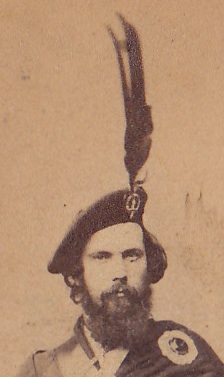 Let’s finish up with one more detail–Major McClellan’s face and that spectacular feather. Quite a look! Now, if this photograph was taken in 1861, when McLellan served with the 79th, he would have been about 36 years old then. That seems to work, I think.

So, while it is not a certainty, I think this photograph is of Major David McLellan of the 79th New York Highlanders, taken early in the Civil War, in his uniform. A wonderful find! 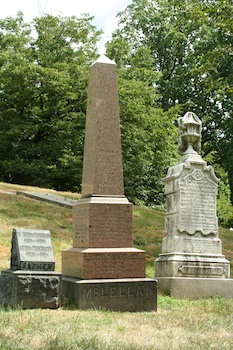 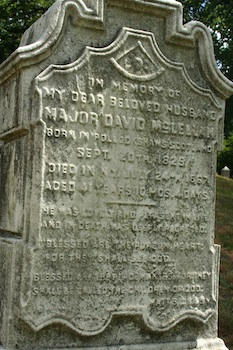 UPDATE: I went out to Major McLellan’s gravesite today, July 9. Here’s a photograph of the McLellan family lot. Note the three McLellan gravemarkers. Strangely enough, both the pink granite obelisk in the middle and the marble monument at the right are dedicated to Major McLellan. It appears that the one at right, detail of which is shown here, was put there by his wife (“IN MEMORY OF MY DEAR BELOVED HUSBAND”) and that the granite obelisk, according to its inscription, was “ERECTED BY HIS FRIENDS TO” his memory. Here’s a close-up of the inscription. 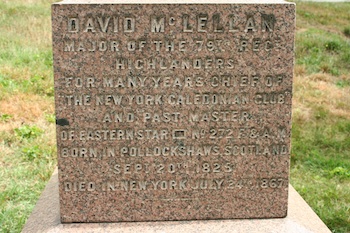 6 thoughts on “A Highlander Of the Civil War”