Whenever I visit Washington, D.C., I try to visit my favorite museums there: the National Portrait Gallery, National Building Museum, the American Art Museum, and the National Museum of American History. Sometimes I find “old friends,” items I’ve seen many times, on display; sometimes I come across things I’ve never seen before.

During my visit to the Museum of American History, I was wandering through an exhibition on 19th century America. Not much new as I walked through it, until I got to the very end. There I came across a display on African-Americans who fought in the Civil War, and, then a display on Mitchelville. Now, I must admit, I had never heard of Mitchelville. But, as I read the text, I knew I was on to something. The text explained that Mitchelville was a town, founded on Hilton Head Island in South Carolina in 1862, that was settled by escaped slaves. It was named for Ormsby McKnight Mitchel (1810-1862), a Civil War general who gave permission for its construction. 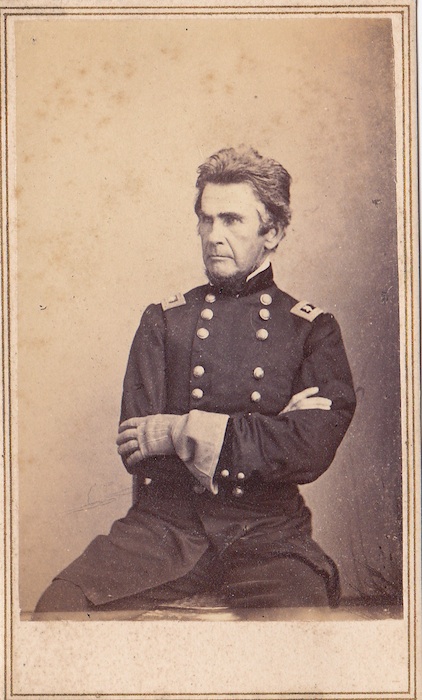 Now, that name certainly rang a bell. I knew him–he is one of the 18 Civil War generals, 16 Union and 2 Confederate, who are interred at Green-Wood Cemetery. Mitchel was a West Point graduate, class of 1829, who resigned from the military in 1832 to pursue a career as an astronomer, becoming one of America’s leading men in that field. When the Civil War began, he offered his services to the Union, and served as a general in Ohio, was promoted to major general in April, 1862, then commanded the Department of the South. The Green-Wood Historic Fund has several wonderful images of Mitchel in its collections, including photographs and prints. Here’s one of our great images of him.

1862 was fairly early in the Civil War. There was a pull back and forth between Lincoln and his generals as to how to handle the issue of escaped slaves. Were they property to be returned to their owners, free men, or something in between?

In November, 1861, Union troops occupied Hilton Head Island. Within days, escaped slaves began to arrive at the Union encampment. General Mitchel ordered a town to be built, with streets, quarter-acre lots, a church, its own laws, and elected officials. Though Mitchel died of yellow fever on October 30, 1862, the town named for him prospered. The above photograph shows Mitchelville in 1864, as the Civil War raged. By 1865, Mitchelville had 1,500 residents. The residents’ primary source of income was working for the military; when Union forces left, the economy suffered severely, and subsistence farming dominated. By the early 1870s, the town was no longer intact, though some residents remained in a kinship-based community that continued into the 1920s.

As I searched the Internet for information about Michelville, I came across this recent report from WSAV in Savannah: “Mitchelville, S.C.: The Town That Time Forgot.” Click here to see it. It appears that a move is afoot to recreate Mitchelville as a historic attraction for the many tourists who visit Hilton Head today. 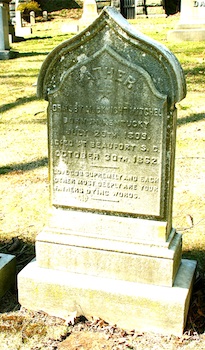 One final note. General Mitchel, because of his background as an astronomer, was known to the men whom he commanded as “Old Stars.” Here’s a photograph of his gravestone at Green-Wood Cemetery. Note the star underneath “FATHER” and above his name. It looks like that star is a subtle tribute to “Old Stars,” who died in the service of his country.

2 thoughts on “The Escaped Slaves of Mitchelville”