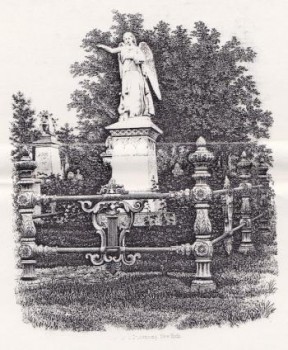 It has been a mystery we’ve been trying to solve for some time now. We knew that the grave of Louis Moreau Gottschalk, America’s first internationally-acclaimed classical composer and pianist, had been adorned, soon after his death, with a marble angel. We had photographs of it–from the 19th century, even from as late as 1930 or so. We had prints of it. There it was, pointing with its right hand, holding a tablet in its left hand that listed Gottschalk’s greatest hits. No one working at the cemetery could remember having seen the angel–all that remained in place was the inscribed pedestal that had supported the angel. So, where and when had it gone?

We also knew that the practice at Green-Wood Cemetery, as well as at many other cemeteries, has long been to bury damaged monuments in their lot, hoping that someday, when funds are available or techniques have improved, that the damaged piece would be dug up and repaired. But where had the Gottschalk Angel gone? Had it been struck by a falling tree? Had it been vandalized? A check of several sets of our archival records failed to provide an answer. So, we sent out our subterranean exploration (poking) crew to probe the soil in the Gottschalk lot. They hammered an iron bar into the ground, listening for the pinging sound from contact with stone. But they came up with nothing. Unable to find the original angel, the cemetery, led by our president, Richard J. Moylan, launched the Gottschalk Project to replace it. Sculptors were sought out across America and they submitted maquettes of their proposals. The field was narrowed to four entries, and a panel was chosen to choose the winner. Please see my blog post of December 1, 2009, “Angel of Music,” for further details.

Just a few weeks ago, our volunteers were working their way through the memorandum files of our archives, unfolding them, taking them out of their acidic envelopes, and noting anything of interest. Lo and behold, there was the Gottschalk file! It contained some very interesting documents–here was a 1969 letter from the New Orleans Philharmonic Symphony Orchestra, reporting that a Gottschalk concert was planned and they were sending “a New York photographer” to Green-Wood to photograph the monument for publication in New Orleans newspapers. Here was a copy of Stereo Review from December, 1968, with a letter to the editor suggesting that either a private benefactor or a foundation should restore the Gottschalk monument. 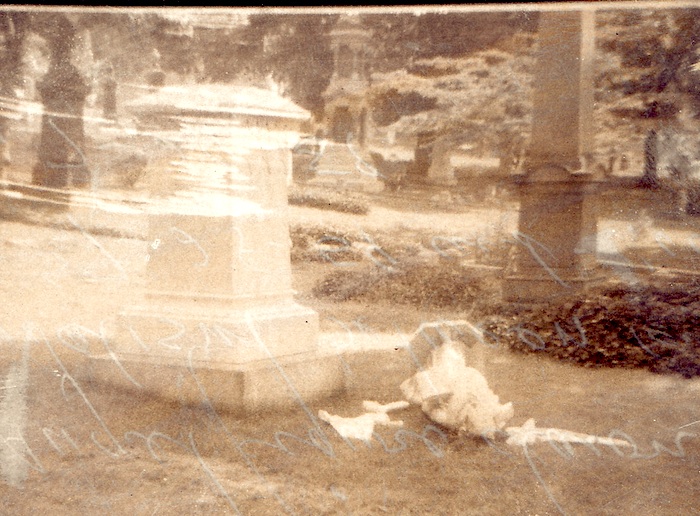 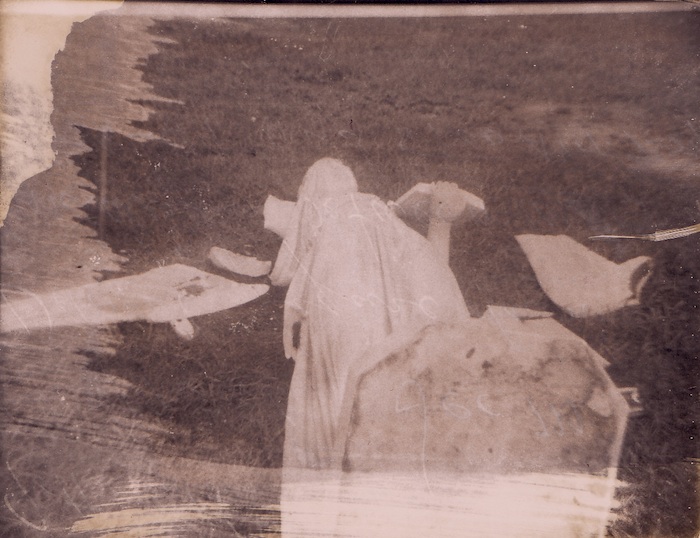 Various other documents were in the file. But particularly intriguing were two Polaroid photographs, on the backs of each was written: “Gottschalk, (lot) 19581, angel figure down, vandalism between 10:00 p.m. 7-28-59 and 8:00 a.m. 7-29-59.” So there it was: the angel, having been toppled and broken, lying on the ground. Here are those photographs.

There also were a few notes in the file concerning this damage. A note from 1969 stated that “the marble angel was badly damaged by vandals in 1959 and soon after interred in the lot.” Now that was intriguing: “interred.” Another note, from 1976, addressed to the cemetery’s corporate secretary, reported concerning the “fallen angel,” that “there is no indication as to what happened to the figure. We will probe in the morning and inform you if it has been located.” Likely that that probe was made and nothing was found.

So, in light of this newly-discovered information, the cemetery has hired an expert who is in the Gottschalk lot as I write this, with his ground-penetrating radar, trying to find the fallen angel. I will report back on the results as soon as I get them.

Update: The rain did stop, and the ground-penetrating radar guy did come back. Unfortunately, he did not find any trace of the Angel of Music in the ground of the Gottschalk lot. So it’s back to plan B: the winner of our design competition will create a bronze angel, funds will be raised, and the new angel will take its place on the original marble base.