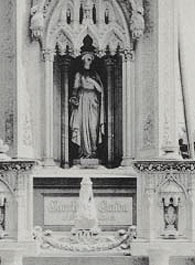 The story of Charlotte Canda and the creation of her monument is a true Victorian drama, filled with tragedy, symbolism and beauty. Charlotte was the only daughter of Charles Canda, a Frenchman who had served as an officer in Napoleon’s Army and later emigrated to America.

On Charlotte’s seventeenth birthday, as she was returning home from her party in a storm, she was thrown from a carriage when the horses bolted. She died in her parents’ arms shortly after the accident.

The artistic Charlotte had been designing a monument for her recently deceased aunt and had sketched the ideas for it on paper. Her father adapted the design concept and personalized it for Charlotte by adding her initials, musical and drawing instruments, books, sculptures of her pet parrots and other symbolic details. The concept featured a niche containing a portrait statue of Charlotte with a star above her head symbolizing immortal life.

The Canda family, sparing no expense, commissioned John Frazee, a noted New York architect and marble carver established on Broadway in Manhattan. He was to realize the design, fabricate and erect the memorial. In his employ was Robert Launitz, a Russian sculptor trained in Rome, who is credited with carving the statue of Charlotte. They were to produce an intricate and delicate monument fit to commemorate a lovely young woman.

Charlotte, a Catholic, having first been buried at Old St. Patrick’s Cathedral on Prince and Mott Streets, was reinterred on consecrated ground at Green-Wood on April 29, 1848. Her monument became extraordinarily popular for people to visit, and knowledge of its beauty and legend spread far and wide.

A sad postscript to this story concerns Charles Albert Jarrett de la Marie, a French nobleman who was Charlotte Canda’s fiancé. One year after her death he took his own life out of the grief of losing Charlotte. He is buried in the adjacent plot marked by an elegant headstone bearing his coat of arms.

Charlotte Canda’s monument is a richly carved Gothic Revival structure in the form of a tabernacle, standing at a prominent intersection of avenues in the Cemetery. An open, arched canopy flanked by two slender spires contain a portrait statue of the young woman wearing a garland of seventeen rose buds representing the years of her life.

Above her head a star symbolizes her immortality and a stylized butterfly with extended wings in the interior of the arch denotes her liberated spirit. An ornamental parapet encloses the sarcophagus set before the tabernacle.

The architecture throughout is embellished with decorative and ornamental motifs meaningful to the deceased, as well as objects specifically depicted to recall her talents and interests. Books, musical and drawing instruments are represented, as well as Charlotte’s much loved parrots. The exquisite carving of the tomb preserves the love, devotion and grief of the parents for their beloved daughter, taken from them at such a special time in her life.

The principal marble elements of the tomb are erected upon a stepped granite platform. On the lower steps, set around the perimeter are four large ornate supports with vases, some with flowers, and four small bases, originally for carved marble bowls of flowers. Four obelisk-like bollards are placed at the rear of the monument.

Flanking the tomb and set a few feet away are two carved marble angels. They are winged female angels in kneeling position, one in a gesture of prayer, the other in a gesture of embrace. These statues are believed to have been carved in Italy.

Positioned in front of the monument, set slightly to the proper left, is a marble stele of Gothic style, which once had the name CHARLOTTE CANDA and other inscriptions that are now illegible. An early photograph from Green-Wood’s archives preserves the legend. Two carved marble vases of flowers once flanked the stone, supported by the extended plinth.

On an adjacent plot, outside the consecrated ground of the Canda site, stands the handsome marble monument for Charles Albert Jarrett de la Marie. His name and epitaph are nearly illegible, but his family coat of arms persists in bas-relief. It seems fitting that his “souvenir” should receive the same consideration for preservation as that of his beloved Charlotte.

The Canda memorial, being largely constructed of fine white marble, is suffering from the effects of over 150 years of weathering and atmospheric pollution. While some areas of the finely detailed carving are relatively crisp, other surfaces have severely eroded. A number of small ornamental and sculptural elements are missing, including the cross above the arch, the spire finials and tracery pendants, decorative vases of flowers and other projecting details. Most critical is the encrusted condition of the marble within the canopy and that of Charlotte’s portrait statue. Here, while somewhat protected from the abrasion of wind and exposure to the direct and varying affects of rain and sun, etc., the marble decomposes as its very binder is drawn to the surface, forming brittle crusts of gypsum. As the marble substrate weakens below the surface, the surface itself crumbles away. Carved detail, modeling, entire fingers, ornaments and features are lost by this process. The now ghostly appearance of the statue and much of the canopy interior is caused by this condition, and is threatened with continued loss of detail.

Whole marble elements of the memorial are loose and require resetting and anchoring. Mortar jointing throughout the structure needs to be delicately removed by manual techniques and replaced with custom mixed white mortar specifically prepared for use on aged marble masonry. Missing elements of the architecture must be skillfully replicated in marble to match the existing, both materially and esthetically. New elements shall be carved to re-establish wholeness to the work, and not attempt to recreate the full detail of the originals. Ornamental objects such as the missing flower vases at a number of locations (some cover original “Lewis” holes which need to be properly filled) will need to follow the examples of surviving elements and use historic photographs and documentation to best advantage. Generally, there should be no attempt to re-carve weathered and eroded surfaces and ornamentation.

The monument requires overall manual cleaning to remove soiling, biological growths and stains, utilizing the gentlest methods available that are minimally injurious to the stone. Pre-consolidation of selected areas of marble is deemed advisable. Cleaning techniques for the encrusted marble may include low pressure, super-fine, dry abrasive methodologies. Application of reliable, non-staining consolidant treatments to all, or selected, areas of the marble is anticipated.

The statue of Charlotte Canda may need to be removed and treated off-site under laboratory conditions conducive to proper cleaning, repair and consolidation.

Similarly, the two marble angels are in an advanced state of marble deterioration, having eroded surfaces and visible cracking, especially of the integral bases. The projecting marble elements, especially the wings, are structurally weakened and in “sodden” condition. Inasmuch as they are discreet, free-standing elements, it would be feasible to remove them to a controlled environment for cleaning, repair and consolidation treatment.

The Canda stele requires cleaning and consolidation, and evaluation for the potential re-carving of the commemorative inscriptions. Should the material be found to be reasonably sound, the original legend is available for transcription from historic photographs and would restore this pertinent aspect of the memorial. The missing vases of flowers, which originally flanked the stele, can also be replicated from documentary photographs. Similar vases on the principal monument may serve as examples of the “character” of the objects.

The stele of Charles Albert Jarrett de la Marie shall also be cleaned and conserved, and evaluated for potential re-carving of the inscriptions.

Ample illustrative and photographic evidence exists regarding the original ornamental cast-iron perimeter fence and gate, approach steps and white marble pebble ground cover for the Canda plot. However, the contemporary environment of the memorial within the mature landscape of the cemetery, challenges the feasibility of restoring these vanished original features.

The present setting includes unusual and very beautiful fir trees that create a canopy of foliage over the monument. The micro-climate caused by the trees is at once esthetically pleasing and environmentally detrimental to the conservation of the memorial. The trees keep the monument in shadow much of the time and contribute to the constant dampness of the site, which encourages biological growth and acid retention. The acidity around the trees themselves may be injurious to marble.

The appropriateness and feasibility of restoring fencing to the Canda or Jarrett de la Marie monuments can be considered.