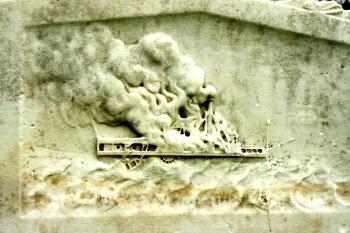 Nathaniel Currier started his lithography printing company that would be become the famous firm of Currier and Ives (both Currier and Ives are interred, of course, at Green-Wood Cemetery) in the 1830’s, printing letterheads, sheet music, and other routine business items. But, in 1835, Currier headed in a new direction: illustrated news. It was in that year that his “Ruins of the Merchant’s Exchange N.Y. after the Destructive Conflagration of Decbr 16 & 17, 1835” was published, within days of the event, by in the New York Sun. And, five years later, the Sun published his print “Awful Conflagration of the Steam Boat ‘Lexington’ in Long Island Sound on Monday Eveg Jany 13th 1840, by Which Melancholy Occurrence Over 100 Persons Perished.” Here’s a detail from a copy of that print, from the collection of the Green-Wood Historic Fund. 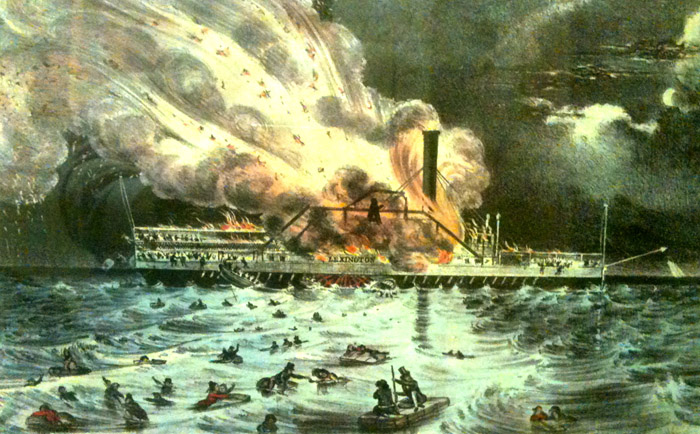 Now, I have long known about a spectacular gravestone in the lot of the Dutch Reformed Church in Cedar Dell at Green-Wood. However, it was impossible to read the inscription on the stone: all except the exploding steamship carved at the top was hidden, because the stone had sunk down into the ground. Look at the detail of the ship on fire above–note the dark line running horizontally across the water–that is the line left by the earth against the stone; only the carving above that line was visible.

Well, Frank Morelli and his Restoration Crew were at work recently on that stone, pulling it out of the ground and resettting it, now with the long inscription on the gravestone visible. And the results are very exciting. It turns out that this is the gravestone of Cortland Hempstead, the “Late Chief Engineer of the Steamer Lexington!” 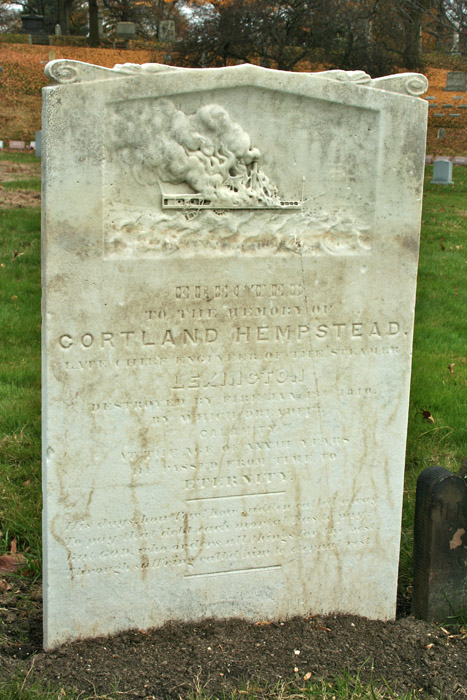 Just a great gravestone, now fully visible as it was intended to be seen.

1 thought on “A Great Gravestone, Resurrected”