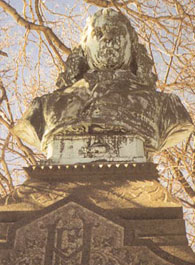 Saved in Time Estimate: $17,500
For cleaning and repointing of granite pedestal; cleaning and refinishing of bronze portrait bust; and related conservation work (details below).

It was indeed Elias Howe, not Singer, who invented and patented the sewing machine in America! Though his innovation was patented in 1846, Howe spent many years developing his machines and litigating over his rights to the technology. Ultimately, he was successful, dramatically increasing his wealth through royalties on every sewing machine manufactured in America.

The Howe monument consists of an elaborate, all-granite pedestal supporting a bronze portrait bust of the inventor by sculptor Charles Calverley. The pedestal consists of a plinth, sub-base, base bearing large polished block letters HOWE, inscribed die within a canopy supported by four corner columns, a gabled capstone bearing Howe’s monogram with leaves, and carved support base for the bust. The bronze portrait bust includes an integral base which has a minature bas-relief on the front face. On the lower surface of the back face appears C. CALVERLEY 1884.

Charles Calverley (1833-1914) is represented in Green- Wood by his bust of Howe, as well as a fine portrait bust of Horace Greeley, along with a bas relief depicting a scene of a typesetter at work. A marble cameo, his specialty, of “Precious Georgie” (George Sidney Cuyler), at Green- Wood, is also by Calverley. Interestingly, Calverley’s career in American sculpture is not well known. He “became part of the rear guard” because of his “bland naturalism”, according to Wayne Craven whose Sculpture in America is a standard of scholarship on the subject.

The Howe plot is surrounded by an impressive granite enclosure consisting of stout posts and wall sections entered by a set of steps with newels. Within the plot are a number of individual grave markers, including one interesting upright marble medallion which is illegible and curiously different from predominant gray granite.

The Howe monument and enclosure are in whole and sound condition requiring gentle stone cleaning to remove soiling and metallic stains while preserving the polished elements of granite. Limited repointing of mortar jointing is required. The bronze portrait bust requires cleaning to remove disfiguring green oxidation and black residues, and chemical re-patining to restore an appropriate coloration and legibility to the sculpture. Protective coatings containing oxidation inhibiting chemicals and waxing shall be applied to finish the work.