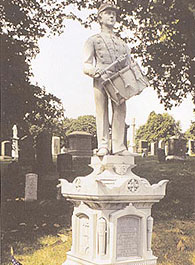 Saved in Time Estimate: $15,000
For conservation coating of the zinc statue and pedestal; resetting and restoration of the small marble marker; treatment of the medal medallion; and installation of protective stone curb and related work (details below).

Clarence MacKenzie was only twelve years old when he marched off to the Civil War as a drummer boy with Brooklyn’s Thirteenth Regiment. While camped in Annapolis, Maryland, he was accidentally killed in his tent by a stray bullet fired by his fellows at arms drilling nearby. He was Brooklyn’s first casualty of the War, and was solemnly returned home and buried in a public lot on the Hill of Graves at Green-Wood. Later, he was relocated to the Soldiers’ Lot which Green-Wood donated specifically for Civil War Veterans. His grave was marked with a “white bronze” monument inscribed: OUR DRUMMER BOY. The proud figure of the boy in uniform with his realistically detailed drum and ornate pedestal stands approximately ten feet in height.

The monument is an interesting survivor of its kind, the pedestal and life-size statue being cast zinc (so called “white bronze”), modeled in a style that replicated carved stone. Indeed, from a distance, the oxidized metal has the appearance of fine grain gray granite.

The Monumental Bronze Company offered a catalogue of architectural, sculptural and decorative items, including generic Civil War soldiers that could be customized to represent Union or Confederate troops. The castings were marketed across the country, and hundreds were made despite competition with more costly bronze or carved stone. In the case of the Drummer Boy, his head was made separately, based on a likeness of young Clarence. Individualized inscription tablets were added as separate items.

Zinc statuary, fountains, plaques and decorative objects were made by a number of companies from the latter part of the 19th century into the early 20th century. They were less expensive than cast bronze or carved stone, and could be made in virtually any form and size, not unlike cast-iron. However, the material was brittle and susceptible to the dynamics of freeze and thaw, climbing kids and vandalism. Many such monuments in public park settings did not fare as well as this Drummer Boy, which enjoys the relative safety and sanctity of the Cemetery.

The last zinc sculpture on public display in New York City’s parks was the “Neptune,” a fountain sculpture on the grounds of Snug Harbor Cultural Center in Staten Island. It has been replicated in bronze for installation in the restored outdoor fountain. The aged zinc statue, beautiful despite a few missing parts, has been placed on prominent display inside one of the Museum buildings. Other park fountains and pieces of this type vanished long ago.

“OUR DRUMMER BOY” is in whole and sound condition, nothing is missing, the joints are tight throughout, and there are no signs of cracking. The surfaces of the zinc are etched by 125 years of exposure, but the oxidized metal has retained the crisp architectural and sculptural detailing. There is no trace of any coating or decorative finish that might have been originally applied.

Conservation of this monument may consider the efficacy of inhibitive and/or protective treatments, in order to give this outdoor work of cemetery art a greater longevity than may be expected without care. Such treatment may chemically or mechanically prevent oxidation, or act as an interim “sacrificial” methodology, protecting the zinc metal. A conservator shall be chosen who has specific knowledge and first-hand experience regarding the preservation of historic zinc monuments, and whose research or prior conservation of these monuments would benefit the care of this object. The monument appears to be slightly out of plumb and level. However, it may not be advisable to disturb the monument to rectify the condition at this time. The monument will be monitored for further movement.

Additionally, conservation of the Drummer Boy plot will include the now illegible, three-element marble headstone set before the statue (possibly MacKenzie’s original Public Lot headstone). The cast-iron 13th Regiment Medallion staked into the ground before the monument will be preserved. The marble headstone may require re-positioning, re-setting, cleaning, re-pointing and consolidation. The iron medallion may require re-positioning, a new stake, preparation, priming and painting.

The masonry foundation of the monument is presently exposed. It may be necessary to consider the installation of a discreet, narrow stone apron around the foundation. The apron will be designed to retain the grade and turf at a distance from the metal base and allow proper drainage. The marble headstone and medallion will be positioned level in front of the monument and the surrounding turf restored.

The tradition of placing small American Flags in front of the plot will be continued.