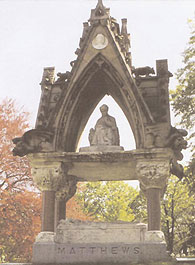 Saved in Time Estimate: $150,000
For cleaning and conservation of existing stone monument including complete raking and repointing; surface cleaning, and chemical consolidation treatment of marble components; re-polishing of red granite columns where damaged; replication of original canopy and spire and installation on top of monument; cleaning and repointing of existing approach steps, and replacement of missing granite newels (details below).

Known as the “Soda Fountain King” in the mid-19th century, John Matthews is credited with the development of a device to carbonate soft drinks. He had learned his craft in his native England. By 1865, when he retired, his manufacturing plant at First Avenue, between 26th and 27th Streets, was mass producing the tin-lined, cast-iron soda fountains that he had perfected. More than 500 establishments in New York City alone were equipped with his devices.

The Matthews monument is a Victorian confection of architectural styles, ornament and sculpture, finely crafted in a variety of beautiful materials. The lower part of the architecture is Romanesque Revival. It includes the large granite plinth inscribed MATTHEWS in 6 inch high “V”- cut block letters, the stout polished red granite column shafts between carved marble bases and foliated capitals (with miniature angel heads at each corner) supporting a marble platform. Within this structure is sheltered a carved marble sarcophagus bearing a life-size Matthews, depicted as a bearded man lying shrouded, perhaps in his last moments. Above him, on the underside of the platform, are carved some of the salient images from his career: experimenting with the production of carbonic gas, leaving England at age 21, and inventing devices for the making of soda water.

Above the platform, which was originally inscribed on front and back edges (now illegible), stands a marvelously detailed Gothic Revival cross vault canopy. The canopy is constructed of richly carved fine brownstone and features fantastic winged gargoyles at each corner, functioning in their traditional dual role as water spouts to drain the roofs and as scary guardians warding against demons! Animal heads project from three-sided gabled finials at the tops of the lancet arches. Others, in relief, embellish the enframement of the arches, and full-round animals form the roof crestings. Unfortunately, the crowning spire of the monument was removed years ago due to its deterioration. The spire completed the upward thrust so characteristic of the Gothic style.

The carved brownstone of the monument is of high quality and is in basically good condition, having only minor areas of exfoliation.

Within the canopy is featured a seated marble statue of a grieving woman. The sculptor’s name KARL MULLER is carved on the base of the sculpture. Two cameo-like marble portrait bas-reliefs of Matthews’ daughters are set in the tympana of the front and rear arches, and a small marble bust of another child stands on top of the monument. The bust had previously been within the protective shelter of the granite columned canopy that supported the now vanished spire. When first erected it was deservedly voted the “Mortuary Monument of the Year.”

The marble sculptures, portraying Matthews and his family, have suffered from the acidic environment and have lost a large percentage of their original sculptural modeling. This condition was amplified by the application of a white cement coating to the principal marble elements, including: the John Matthews sarcophagus, the platform with ceiling bas-reliefs and inscriptions, the seated woman figure, and the four bases and four capitals of the main columns with their originally fine carvings. The carved work by Karl Muller on this monument is extraordinarily vigorous and original.

Ironically, it is sulfuric acid in the urban atmosphere of New York that has caused the marble deterioration in the Matthews monument. It was the use of sulfuric acid in combination with marble chips (calcium carbonate) that Matthews used to produce carbonic gas, which was the “essence” of his lucrative business. Incidentally, Matthews bought the marble chips from the contractors who were carving the stones for St. Patrick’s Cathedral in Manhattan at that time.

The Matthews monument requires gentle overall cleaning of the brownstone, marble and granite with chemical and rinsing techniques specific to each material. The masonry is in need of complete manual raking and re-pointing of jointing, using custom mixed mortars specifically prepared and/or tinted as appropriate to each material. The gargoyle water spouts, and the gutters behind them, must be cleaned out so that their vital function is fully restored.

With regard to the white cement coating on the marble elements, consideration shall be given to manual and chemical removal techniques that will have minimal effect on the substrate. The feasibility and/or advisability of complete, or partial, removal to ameliorate the results of the coating shall be investigated. It would appear that expert manual scraping would be effective in removing the minimal residues of cement on the Matthews sarcophagus, whereas the denseness of the coating on the seated woman figure, capitals and bases would appear far more intractable, especially considering the fragile condition of the soft marble beneath the hard cement.

Should satisfactory results be achieved in exposing the existing marble, consideration shall be given to the effectiveness of an application of an appropriate consolidant to stabilize the marble elements of the monument. The bas-relief portrait roundels and small bust at the top of the monument would also benefit from consolidation.

The four existing polished red granite columns have been “burned” by acid cleaning solutions, resulting in streaks or blanching, and loss of polish on three of the units. These columns shall require traditional re-polishing to restore the original color and sheen in areas where damage has occurred.

The missing spire shall be replicated, including the canopy with six supporting columns. Photographic documentation exists of the original appearance that could help determine its proper size, materials, detailing and construction. The spire is indeed the “finishing touch” of this extraordinary monument and it ought to be restored to complete the artistic intent of the work. When this replication proceeds, evaluation of the small marble bust in terms of replacement may also be considered.

The Matthews Family plot is approached by an existing set of four granite steps from Valley Avenue. Originally there was a double swinging gate between low newel posts on the top platform and curb, and a perimeter fence. The granite approach steps shall be reset, cleaned and re-pointed. The missing low granite newels shall be replicated in granite to match the existing and set in their original locations.