In 2012, I blogged about Clarkson Crolius, one of Green-Wood’s most interesting permanent residents. At that time, The Green-Wood Historic Fund just had purchased one of his stoneware crocks:

So let’s start at the beginning: who was Clarkson Crolius? Clarkson Crolius (1774-1843) was part of a multi-generational family dynasty of New York City stoneware makers. Stoneware was the Tupperware of its day—ubiquitous containers of many shapes and sizes for storing liquids. Stoneware was fired and decorated clay. Clarkson’s grandfather, Johan Willem (William) Crolius, immigrated from Germany and built his pottery on Reade Street, near Broadway, in Manhattan. Clarkson’s father, John Crolius, then went into the business, followed by Clarkson himself. But Clarkson Crolius was not just a stoneware maker–he was also a respected civic and governmental figure. In 1811, as Grand Sachem of the Tammany Society, he laid the cornerstone of the old Tammany Hall opposite City Hall Park. When the War of 1812 began, he was a major in the 27th Regiment of the New York State Militia; by the end of the war he had been promoted to colonel in the U.S. Army. He was elected and served as an alderman and an assemblyman for many years. In 1825, he was voted speaker of the New York State Assembly. In 1830, he was an incorporator of the Canajoharie and Catskill Railroad–then the transportation of the future. And, in 1831, he was the leader of the National Republican Party in New York City. His son, Clarkson Junior, who carried on the family stoneware business, is interred with him in lot 59–one of the first Green-Wood lots sold.

Green-Wood has collected Crolius material over the years. Here is another Crolius stoneware piece in our collections:

And here is a notice signed by Clarkson Crolius, Sr., in his capacity as New York City’s Collector of Arrears, for $10.94 in taxes, past due:

In April of last year, collector Ed King, after coming across my blog post from 2012 about Clarkson Crolius, contacted me. Ed e-mailed that he owned a portrait of Crolius. I was intrigued and we communicated back and forth. The end result: The Green-Wood Historic Fund Collection is now the proud owner of this great portrait.

How, you ask, did this come about? Ed King noted in his e-mail that he had been to Green-Wood, had been on a “great” tour of the grounds, and thought that The Green-Wood Historic Fund was doing “a nice job” interpreting the cemetery and the stories of its permanent residents. Ed further explained, just a few days ago:

I started collecting antiques in the late 60’s. My inspiration was the collection at the Monmouth County Historical Assoc. in Freehold, N.J. My focus was on collecting and preserving 18th and early 19th century furniture and decorative arts objects from Monmouth County. This led to an extensive collection of pastel drawings and oil paintings by an itinerant artist named Micah Williams who had worked in Monmouth County from about 1815 until about the 1830’s. Micah was from New Brunswick, N.J. and had moved around northern N.J. and NYC doing portraits,

About 10 years ago, MCHA started planning an exhibition of Micah Williams’ works so I intensified buying his portraits in anticipation of the exhibit. One of the portraits I purchased at auction was of Clarkson Crolius, a potter in NYC. The Crolius pastel, like all my other Williams pastels, was sent to the Conservation Center for Art and Historic Objects in Philadelphia, PA where it was conserved and installed in a sealed package. The sealed package ensures that no dust nor moisture will affect the drawing which is executed on paper.

I did a search online and found that Crolius had been interred at Green-Wood Cemetery which I had previously toured and thought it would be great to put a face to one of Green-Wood’s residents.

Interestingly, I had seen this portrait of Clarkson Crolius even before Ed King contacted Green-Wood. From May through September, 2013, the Monmouth County Historical Association in Freehold, New Jersey, hosted the exhibition that Ed refers to: “Micah Williams: Portrait Artist.” I have visited the nearby town of Spring Lake several times in recent summers; on a rainy day during the summer of 2013, when there was not much to do in a beach community, that exhibition looked like good entertainment. So I headed off to see it—and it was splendid! And there, of course, in the exhibition, was that portrait of Clarkson Crolius!

So now let’s go back to October of 2012. That’s when Barridoff Galleries in South Portland, Maine, advertised an upcoming auction. Included in that “Fine Auction [of] American and European Art” was a pastel “Portrait of a Gentleman” by Micah Williams. It was the Clarkson Crolius pastel portrait.

Ed King was the winning bidder on the lot.

Bernadette M. Rogoff, the now-retired curator of the Monmouth County Historical Association, has been fascinated by painter Micah Williams for years. There is no person in the world who knows more about Williams than Bernadette. In an interview published in The Magazine Antiques in July, 2013, she said that she had be drawn to Williams by “simple curiosity”:

I recognized immediately that he was an exceptional talent and wanted to know more about him. I began by reviewing the seminal research by [Mrs.] Irwin F. Cortelyou in Antiques in the 1950s and by studying the twenty-two pastel portraits in our collection to familiarize myself with his technique. Then I looked at property deeds, tax lists, court records, newspapers, account books, and ledgers. I was fortunate to track down a descendant and found previously unstudied family letters that are rich in detail.

The result of Bernadette’s research was the exhibition, “Micah Williams: Portrait Artist.” The Crolius portrait was item No. 4 in the exhibition catalogue. Here is its exhibition label: 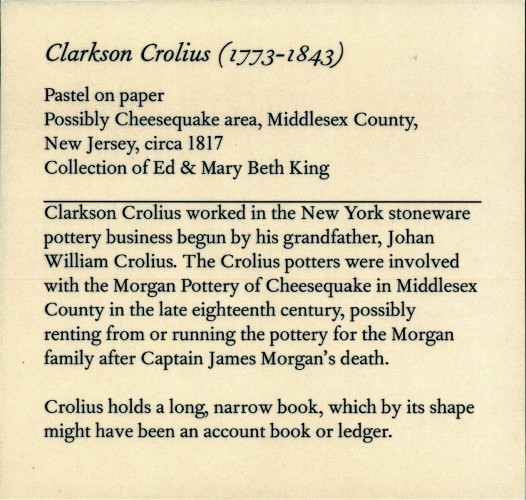 Curator Rogoff shared her thoughts on this painting in “Micah Williams and the Portrait of Clarkson Crolius: Some Theories and Questions”:

Among the many Micah Williams portraits appearing on Ms. Irwin Cortelyou’s early 1970s checklist was a pastel portrait titled “Mr. Crolius.” In her entry for this work, Cortelyou based her tentative identification of the sitter on the resemblance between the Williams portrait and a portrait if Clarkson Crolius by New York itinerant portrait artist Ezra James (1786-1836) now in the collection of the New-York Historical Society. Moreover, the portrait itself was described as “descended in family to John Alexander Crolius, Rumson, New Jersey.”

The portrait in question is clearly by Micah Williams and depicts a sturdy older man, probably between the age of forty and fifty or so, with graying hair, dark brown eyes, and a broad face with pronounced grooves running from the corners of the nose to the sitter’s mouth. The sitter is dressed in a black coat and black waistcoat, with a white stock and shirt front ruffles peeping above the closely-buttoned waistcoat. The man is oriented to the viewer’s right, and holds a book in his right hand, with the thumb holding the book open slightly. The book’s cover is reddish brown, with the swirling leather covers often seen in Williams portraits. The edges of the book pages themselves are tipped with a lovely robin’s egg blue color (more typically, the pages in Williams portraits are yellow) which adds a striking yet delicate bit of color in the otherwise simple palette.

Cortelyou noted in her entry that the portrait had a sheet of the New-Jersey Journal of Elizabeth-Town newspaper, dated December 10, 1816, glued to a later backing. The sheet was most likely the portrait’s original newspaper lining, which Williams typically used as a secondary support liner for the primary portrait paper. It has been confirmed that this portrait does in fact have the identified newspaper sheet glued to the backing at this time.

Williams produced pastel portraits from early 1815 to 1835, when he apparently stopped working as an artist. (See Rogoff, “Some Recent Discoveries About Micah Williams,” The Magazine Antiques, January 2009). Attempts to date Williams’ pastel portraits chronologically by visual means alone is virtually impossible; Williams remained highly consistent as an artist for his entire career. This particular portrait certainly resembles many of Williams portraits between 1815 and 1825, but could also have been produced after that time and even during his New York years, when he lived on Clinton Street with his family until returning to New Brunswick in about 1832. If the newspaper sheet glued to the portrait’s current backing is in fact its original newspaper lining, this would indicate a circa date of about 1816 or so, as the majority of Williams portraits retaining dateable newspaper linings appear to have been created within a year or two of construction of the stretched paper panel assembly.

Clarkson Crolius was one of the many family members involved in the New York stoneware pottery business begun by his grandfather John William Crolius. There are indications that the Crolius potters were at one point involved with the Morgan Pottery of Cheesequake area in Middlesex County in the late 18th century, possibly renting or running the pottery for the family after Captain James Morgan’s death. Although I could not confirm whether or not Clarkson Crolius visited Middlesex or Monmouth County in the early 19th century, it is possible that he was in the area long enough to have a portrait taken. Identifying unknown sitters by visual comparison with other portraits is problematic at best, and to name a particular sitter solely on this basis somethings contributes more confusion than clarity. It is interesting to note, however, that Cortelyou’s initial theory may be correct in that the sitter was a member of the Crolius family. The portrait descended within the Crolius family to Amelia Crolius of Yarmouth, Maine, who is the portrait’s current owner. While enough specific information might never surface to firmly identify this particular sitter, there is enough circumstantial evidence to support an attributed identification of the sitter as Clarkson Crolius.

Mrs. Irwin Cortelyou’s old 1970 checklist. The Crolius entry reads “Crolius, Mr. Possibly Clarkson Crolius (1773-1843), stoneware manufacturer in New York City and Politician. The identification of the sitter as Clarkson Crolius is suggested because of the sitter’s resemblance to a portrait of Clarkson Crolius by Ezra James owned by the New-York Historical Society, reproduced in Theodore Bolton and Irwin F. Cortelyou, Ezra James of Albany (New York: The New-York Historical Society, 1955) p. 86. Pastel on paper. 23 ½ x 19, sight. A page from the New-Jersey Journal of Elizabeth-Town, dated December 10, 1816, is pasted to a new backing. Owner: Descended in family to John Alexander Crolius, Rumson, New Jersey.”

Appraiser Betty Krulik has worked in American and European art for the past 30 years at leading New York galleries and auction houses and as a private consultant. She examined the Williams portrait of Crolius and the market:

The work subject of this appraisal, Portrait of Clarkson Croilus, is a full and finished work, with a perfect line of provenance, in the family of the sitter. The work is in fine condition.

The works by Micah Williams that sell best are, firstly, children; and secondly, attractive, known and famous sitters.

This portrait of Clarkson Crolius is of an “attractive, known, and famous sitter.” It is a tremendous addition to Green-Wood’s collections–and will display well with the stoneware, and other items, pertaining to him that we have in The Green-Wood Historic Fund Collections. It is a great folk art painting of one of our permanent residents–something that is a first in our collections. It will help us tell Clarkson Crolius’s fascinating story.

Thank you, Ed King, for your generous donation!

And thanks to Green-Wood’s Manager of Historical Collections, Stacy Locke, for her excellent photographs and great help in organizing text and images for this blog post.