There is always more to be learned about Green-Wood. And one can never tell how the next discovery will occur.

Several weeks ago, I was contacted by Lance Ingmire. I know Lance–he served on New York State’s Civil War Sesquicentenial Commission. He also served as president of the Friends of the New York State Military Museum and is the regimental historian for the 95th New York Volunteer Infantry. Lance told me that he was working at organizing the New York State Sons of Union Veterans archives and had come across a small ring binder that had written, on its first page, “Greenwood Cemetery.” Were we interested in it? Of course we were!

The binder arrived in the mail soon after our conversation. It looked pretty nondescript:

But, when I opened to the binder’s first page, things got much more interesting:

Upon further inspection, it became apparent that this was one of several such binders that were created quite some time ago. Indeed, that first page noted, “#1 Route, ‘S.W.’” The implication was that there had been several of these. The binder then continued with typed instructions—how to start the walking tour, directions to find the first grave, then the second, etc., all the way up through the 46th grave, with hand drawn maps of each grave location.

Plotting the locations of each of these graves on a Green-Wood map, it became apparent that this binder covered graves along the southwest section of the cemetery (“S.W.” was noted on the first page)—from Green-Wood’s Main Gates down to its southwest corner at 36th Street and Fifth Avenue—just across from where the Jackie Gleason Bus Depot is now—then about 2/3 of the way up the cemetery map along 36th and 37th Streets towards Fort Hamilton Parkway. In all, the locations covered about one third of the Green-Wood map, leading to an educated guess that there were likely two other binders.

But questions remained. Who had put this binder together? And when? As I looked at the names in the binder, and did some research, it became apparent that all of the names had two things in common: not only were they all Civil War veterans, but they also all had been members of the Marquis de Lafayette Post of the Grand Army of the Republic—New York State’s Post 140.

The Grand Army of the Republic was a fraternal organization created soon after the Civil War as a meeting place, service organization, and political force for veterans. Post 140 was chartered in 1880 and was in Manhattan.

New York State’s G.A.R. membership rolls are now at the New York State Archives. They recently have been digitized and are accessible online through Ancestry.com. Here is the description of them that appears on Ancestry:

The first post of the Grand Army of the Republic (GAR) formed in Decatur, Illinois, in 1866. From there the organization spread quickly, and by 1890, there were more than 400,000 members in over 7,000 posts across the U.S. The GAR was formed with the goal of Union Civil War veterans helping other veterans in need and based on the principles of fraternity, charity and loyalty.

GAR posts were set up on a local level, with each post enlisting veterans from a particular part of a city or town. This collection includes images of post descriptive books from the state of New York. The books are arranged by post number. The descriptive books include name; age; birthplace; current residence; occupation; date of entry into service (with rank, company, and regiment); final discharge date (with rank, company, and regiment); length of service; cause of discharge; date of entrance into the GAR; transfers, honorable discharge, dismissal, or suspension from post; whether wounded in the war, and remarks.

This is the cover of the Lafayette Post’s descriptive book: 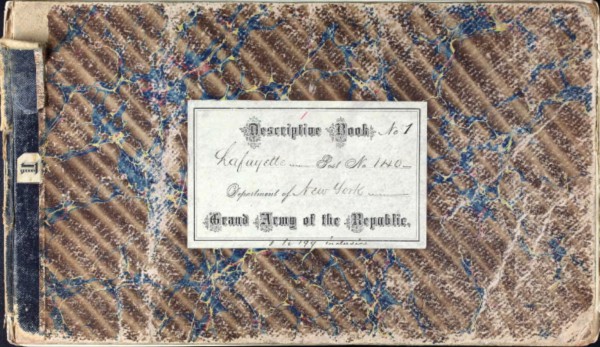 And this is what the data inside the Lafayette Post’s Descriptive book looks like–a 19th century spreadsheet. Entry #14, below, is for Charles Appleby, who appears in the ring binder tour as stop #4: 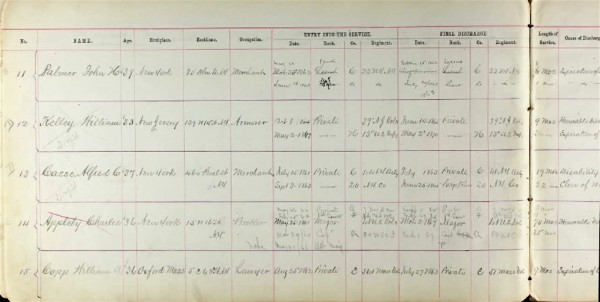 The ring binder records dates of death for each of the veterans. The first year of death listed is 1891; the last 1932. The directions to find each grave, as well as the section and lot at Green-Wood and the date of death were typed. And what appear to be dates of visits are handwritten in pencil on individual pages, usually in conjunction with the occasional note that a veteran had no gravestone. These dates include 5/16/38, 5/17/41, “also 1942,” 5/24/42, 5/26/45, as well as 5/14/35, 5/17/41, 5/26/45, 5/22/48. These appear to be notations made by visitors as they followed the route to each of these graves on or about Memorial Day of years between 1935 and 1948. All of these handwritten dates seem to be in May, likely for Memorial Day commemorations, when the Sons of Union Veterans and others would have visited Green-Wood to pay their respects to Civil War veterans interred there.

Here’s an example of the two pages of the ring binder which are devoted to each veteran:

Note the notation here in pencil: “No marker.” So, it was particularly rewarding, when I went out on the grounds with Jim Lambert, our dedicated volunteer, to walk the route as instructed in the binder, to find this:

We know a good deal about Charles Appleby–thanks to volunteer researchers from our Civil War Project. He was born in New York City in 1844 and served in three different regiments during the Civil War: as a private in the 7th New York State Milita, as a first lieutenant in the 3rd Regiment, United States Infantry, and as a captain in the 80th United States Colored Troops. He took part in the siege and capture of Port Hudson, Louisiana, served as provost marshall of Marshall, Texas, and was wounded in the arm during a skirmish at Jackson, Mississippi. A charter member of Lafayette Post #140 of the G.A.R., he served as its commander. His name is displayed on the African American Civil War Memorial in Washington, D.C., plaque C-86; he was a white officer who commanded a company of black troops late in the war.

The directions in the ring binder for finding each of the graves were very clear and well done–with one exception. One of the directions was to “pass through 2 hedges and turn left . . . .” As one might expect, those hedges are no longer there, making that instruction a bit of a problem.

Of the 46 men whose graves were marked in this binder (though the title page says 1-45, one more was later added at the end), seven were of veterans that Green-Wood’s Civil War Project had not identified as being interred here. Since discovering their final resting places at Green-Wood, volunteers have written biographies for them–and those biographies have been posted online.

From a simple, nondescript little binder–to increased knowledge of Green-Wood and its permanent residents. A triumph all around!

3 thoughts on “From a Nondescript Binder–New Discoveries!”