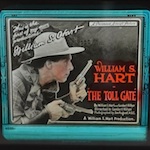 William Surrey Hart (1865-1946), or “Two-Gun Bill,” was a Silent Film actor often considered as the first great Western Movie Star. Known for his unique screen presence, Hart developed a signature persona: the honest, taciturn Cowboy. He insisted on bringing authenticity to his roles, believing that earlier filmmakers had glamourized the West. This lantern slide advertises the 1920 film The Toll Gate, credited as the first of William S. Hart’s own productions. It depicts Hart in his signature two-gun cowboy role. A lantern slide is a photographic image laid on a glass plate. It functioned as an early version of the movie poster, as the image would be projected onto a screen or wall to promote an upcoming film. Click the image to expand.