COVID-19 Update: All entrances open daily, main gates from 7am - 7pm (click for details)
Where in the World is Anthony Berger?
By Jeff Richman on January 28th, 2014 in Green-Wood Historian Blog, Uncategorized  |  8 Comments

Where has Anthony Berger gone?

In the 1860s, Anthony Berger ran Mathew Brady’s Washington D.C. National Photographic Art Gallery. It was Berger who, during the Civil War, took some of the most famous portraits of President Abraham Lincoln. But, as noted in Mathew Brady and His World, “[c]amera operators came and went . . .” What happened to Berger after he left Brady’s employ? Most importantly, for my purposes, did he wind up, in 1906, interred at Green-Wood Cemetery?

But, now I’m not so sure. I’m thinking the Anthony Berger who is interred at Green-Wood just might be the man who took some of the greatest photographs of Abraham Lincoln.

So who was this Anthony Berger? Well, the Anthony Berger we are interested in worked as a photographer during the Civil War in the studio of the famed Mathew Brady. Brady has been known as a giant of Civil War photography for generations; many books have been written about the extraordinary photographs that were taken in his New York City and Washington studios. Most casual students of the Civil War know the name of one photographer: Brady. But Brady was more entrepreneur and promoter than photographer. Unfortunately, book after book about Brady has given short shrift to the artists–the camera operators, the men who actually took the photographs. I have looked at 7 books about Brady; one seems to mention Berger in a list of Brady employees but spells his name Burgess; another gives him credit for his two most famous portraits of Lincoln. But none of these books give any other information about Berger. Though we do know that Anthony Berger took a total of thirteen photographs of President Abraham Lincoln, more than any other photographer except Alexander Gardner (who managed Brady’s National Photographic Art Gallery on Pennsylvania Avenue in Washington, D.C., until 1862, when he went into business on his own), little else is known of him.

We do know which Lincoln photographs are by Anthony Berger. This photograph by Berger was used as the basis for the Lincoln-head penny, the 15 cent stamp in 1866 and the 3 cent stamp in 1920: 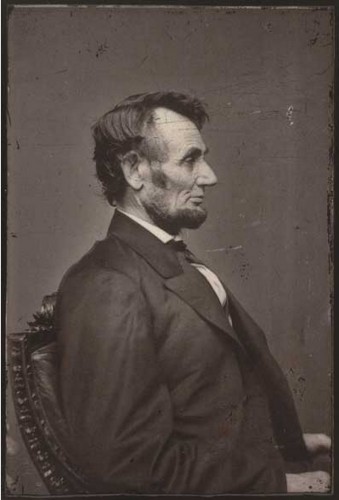 This is one of a series of photographs that Anthony Berger took of President Abraham Lincoln at the Brady Gallery in Washington in the winter of 1864, as the Civil War dragged on. Modern albumen print from 1864 wet-plated collodion negative. National Portrait Gallery. 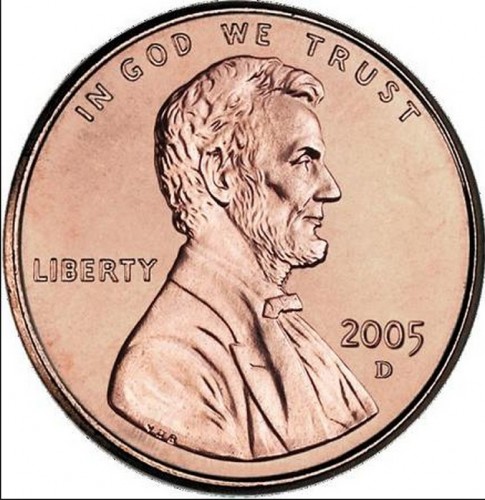 This portrait of President Abraham Lincoln was derived from Anthony Berger’s photograph that appears above.

At the same sitting, Lincoln was photographed with his son Tad: 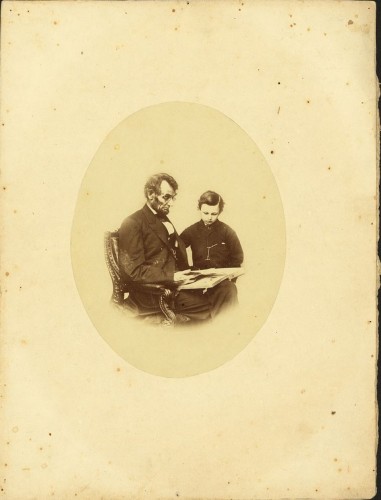 Berger also took this photograph of Lincoln; it was used for the image on the $5 bill: 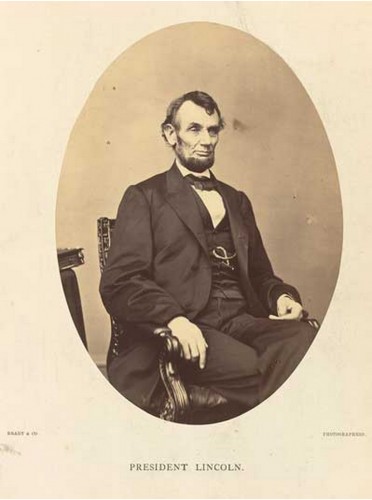 President Abraham Lincoln, 1864, by Anthony Berger at the Brady Studio. For the president’s son, Robert Todd Lincoln, this was “the best likeness of my father.” Library of Congress.

One of Anthony Berger’s portraits of Lincoln was used for the portrait on the $5 bill.

But what happened to this man, the photographer Anthony Berger, after he took these photographs of Lincoln?

The name Anthony Berger is surprisingly rare in America during the 1860s. In the 1860 United States census, there are only 5 men named Anthony Berger and 7 men with the alternative spelling of Anthony Burger in America. None of these 12 men is listed as living in Washington, D.C., or an adjoining state in the 1860 census. Of the 3 million plus men who served in the Union Army, only 3 were named Anthony Berger. One in a million! Further, no man in the Confederate Army had that name. And no man in either the Union or Confederate Armies was named Anthony Burger–a possible alternative spelling.

We know that a man by the name of Anthony Berger was working as a photographer in Washington, D.C. in the early 1860s. Is it possible that he, a humble locksmith, learned photography (perhaps at Brady’s National Portrait Gallery at 785 Broadway in New York City, just south of Grace Church; that gallery was open from 1860 through at least the end of the Civil War in 1865); and moved to Washington to work for Brady in just a year or two? In that era, there were no four-year programs to get a degree in photography; you learned the art from a photographer, in a gallery. So, yes, it is possible that Brady, for whatever reason, hired Berger and taught him the trade. Can we prove that he did? No, we can’t.

But the Anthony Berger trail gets warmer with an article in the Brooklyn Eagle on May 13, 1873, reporting that Brooklyn’s newly-formed Photographic Art Association had held a meeting the night before at the studio of Alva Pearsall on Fulton Street in Brooklyn. The list of attendees includes several prominent photographers who would choose Green-Wood as their final resting place: Alva Pearsall, Charles H. Williamson, and Frank E. Pearsall. And, listed as a member of the executive committee: Anthony Berger! So we know that, in 1873, a man named Anthony Berger was a Brooklyn photographer–and a respected one, at that; otherwise he likely would not have been chosen for the executive committee. (Update: thanks to Pastor Jack Wilson, who found the Brooklyn Daily Union‘s report on the meeting of the Photographic Art Association for April, 1873, just a month earlier, in which it was reported that “Mr. Anthony Berger also read a paper “Retouching Negatives” and illustrated the same with pencil drawings: which was accepted and ordered on file.” This is further evidence that this Anthony Berger was experienced in the photographic techniques).

After I wrote a first draft of this blog post, I took a day off to visit three antique shows in New York City. At the show at the Park Avenue Armory, I saw this:

A 19th-century sign painted on wood, advertising the business of an Indiana “artist.”

Upon closer examination, it is clear that “ARTIST” here meant photographer: 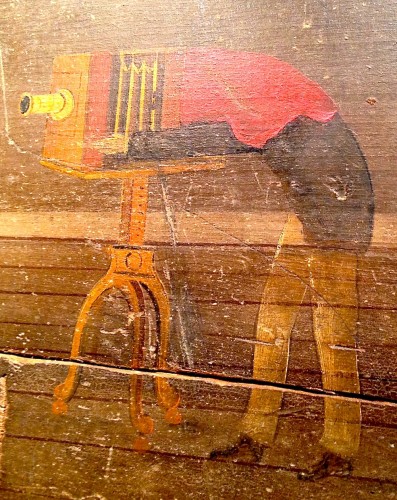 As this detail makes clear, the “ARTIST” advertised here was a photographer.

There is one Anthony Berger or Burger in New York City in the 1870 census: Anthony Berger, 45 years old, lived with Doras Berger, a female, and a 15 year old female named Louisa. That, I believe, is an error by the census-taker; the year of birth for “Louisa” matches that of the Bergers’s son, Louis, in other censuses. Here Anthony is again a locksmith. In the 1880 census, Anthony Berger (who is living with Dorathy (sic) and Louis Berger), is residing in New York City. He is listed as a bronze manufacturer born about 1826 in Germany. In the 1900 census, the three of them are living in Brooklyn. In the 1910 census, Dorotha (sic) and Louis are still residing in Brooklyn, but Anthony is not listed. He, as we know from Green-Wood’s records, had died in 1906.

There is one other Anthony Berger who shows up in New York City during this era. On June 18, 1897, that Anthony Berger applied for a passport. Intriguingly, his occupation is listed as artist–which could mean, as we have discussed and seen above, photographer (though the term “artist” was used more interchangeably with photographer in the early years of photography, when photographers were competing with painters as portraitists). Further, the Anthony Berger who applied for a passport states on his application that he was born in 1832. Certainly of appropriate age to have worked in the Brady Gallery in the 1860s. However, his application also states that he had resided in the City of New York from 1854 until the date of the application. That would seem to call into question whether he had worked, and seemingly lived, in or near Washington, D.C., for several years in the 1860s.

What do you think? Anyone out there have some clues?

8 thoughts on “Where in the World is Anthony Berger?”