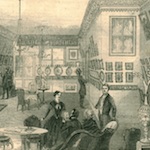 The Meade brothers, Charles R. Meade (1826-1858) and Henry W. M. Meade (c.1823-1865), were pioneers in American photography. Among the first studio photographers, they are credited with popularizing the daguerreotype, making the medium available to the masses. The accompanying image, originally published in an 1853 issue of Gleason’s Pictorial Drawing-Room Companion, depicts the Meade Brothers’ Gallery at 233 Broadway in New York City. At this location visitors could view and purchase a wide variety of daguerreotypes including portraits of prominent people and panoramas of cities around the world. Their collection even included a rare portrait of the reclusive Louis Daguerre, inventor of the eponymous daguerreotype process. The Meade brothers had two photographic studios on site as well as photography equipment and supplies for sale. Click the image to expand.