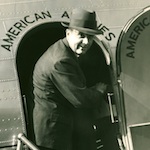 Juan Terry Trippe (1899-1981) was a remarkably successful American Airline entrepreneur, founding Pan American Airways in 1927 and building it up to the most prominent airline of the Twentieth Century. The above image depicts Trippe boarding an American Airlines airplane. Trippe famously expressed, “The true objective is to bring to the life of the average man those things which were once the privilege of the fortunate few,” a goal undeniably achieved by Pan American Airways. Under his leadership, Pan Am expanded travel routes and offered low-cost tourist fares to the masses. Click the image to expand.