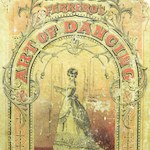 Edward Ferrero (1831-1899) served as a Union General in The Civil War, but his performances on the dance floor far outshone his military career. Although marred by accusations of misconduct in the U.S. military, Ferrero was universally revered in the world of dance. Ferrero earned a reputation as an expert choreographer and dance instructor. He operated Apollo Hall ballroom, the precursor of NYC’s Apollo Theater. In the years before the war, Ferrero published The Art of Dancing, a tome which remains important today for researchers of mid-nineteenth century dance. Click the image to expand.