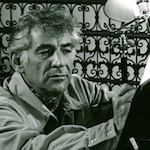 Leonard Bernstein (1918-1990) achieved worldwide acclaim as a composer, conductor, pianist and music educator. Bernstein is pictured here doing what he did best: composing at the piano. His artistic virtuosity is credited with bringing a new respect to American music, bridging the gap between the classics and popular music of the 20th century. Bernstein scored West Side Story, which was inspired by Shakespeare’s Romeo and Juliet. Premiering on Broadway in 1957 with a film adaptation released in 1961, this beloved score epitomized the eclectic theatrical style that set Bernstein apart from his contemporaries. Click the image to expand.