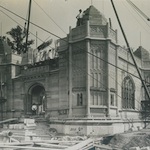 Green-Wood’s beautiful limestone chapel was designed in the Gothic-Revival style by the architectural firm of Warren and Wetmore, who also designed Grand Central Terminal. The image above is one of a series of photographs taken of Green-Wood’s historic chapel during construction. Dated July 6, 1911, it shows the foundation completed and the side walls erected, but the decorative spires of the top four corners are unfinished and workers have not yet begun building the central dome. The chapel would not be completed in its entirety until later that year. Click the image to expand.