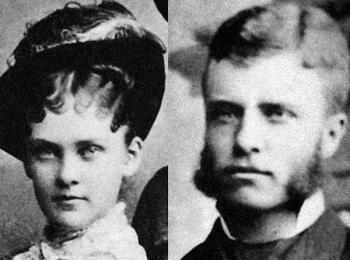 We have an event planned for Green-Wood this Saturday, commemorating the Valentine’s Day of 1884, when, tragically, both Theodore Roosevelt’s wife, Alice (pictured above, with Theodore as a young man), and mother, Martha (shown here), died of disease. Roosevelt, a New York State Assemblyman at the time, was crushed. In fact, he wrote in his diary, “When my heart’s dearest died, the light went out of my life for ever.” Though he tried to carry on, he could not, and fled to the Dakotas to recover. This was a time that crucially shaped the man who would become, less than twenty years later, president of the United States.

On Saturday, author Patricia O’Toole wil speak about Roosevelt and then I will lead a trolley tour of Green-Wood, focusing on the Roosevelts, many of whom are interred at Green-Wood. Though President Theodore Roosevelt is interred in a cemetery in Oyster Bay on Long Island, near his summer White House, Sagamore Hill, his wife Alice, his mother Martha, his father Theodore (shown here), his uncle Robert, his grandfather Cornelius, and several other relatives, are all interred in the Roosevelt family lot at Green-Wood.

As I planned Saturday’s tour earlier this week, it had occurred to me that the snow on the ground would create a real problem for the group to walk around the lot. So, I had asked our superintendent of the grounds, Art Presson, if he might have his men do some shoveling there.

I’ve been out to that lot many times. But I wanted to go out again yesterday to refresh my recollection of what and who is there. Well, when I got out to the lot yesterday, I really was amazed: what a cleanup job! Here’s a photograph of the lot directly across the street from there. 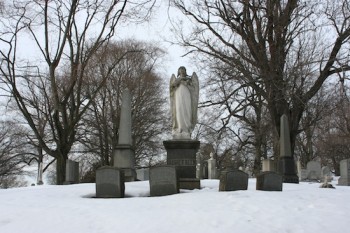 Quite a covering of snow! And here’s the Roosevelt lot as it looked yesterday. Wouldn’t we all love to have these cemetery workers available to clean our walks and driveways? Beautifully done!

If you’d like to join us on Saturday, click here for more information about the day’s events. 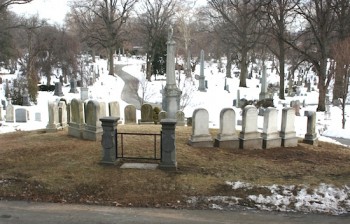