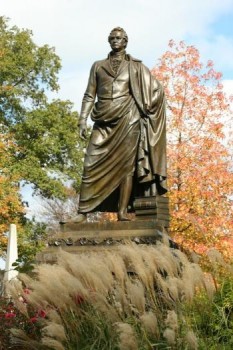 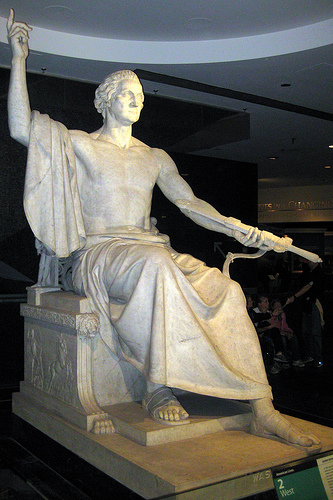 On a recent trip to Washington, D.C., I visited two sculptures that relate very much to the De Witt Clinton bronze, by Henry Kirke Brown, that is at Green-Wood Cemetery. My first stop was in the Smithsonian’s History Museum, where I visited Horatio Greenough’s sculpture of George Washington. It is really quite fascinating–a bare-chested “Father of Our Country.” Greenough created it  for the grounds of the United States Capitol. But, when Congressional leaders discovered that Washington was a bit undressed, shall we say, they got it off their grounds asap. That’s why it’s in the museum now. Greenough had meant well: classical heroes had long been depicted bare-chested.

I then walked west towards the White House. Just across Pennsylvania Avenue is Lafayette Square Park, where a bronze statue of President Andrew Jackson stands. Here it is in a half stereoview; the photograph dates circa 1870. This is the oldest heroic bronze cast in America. 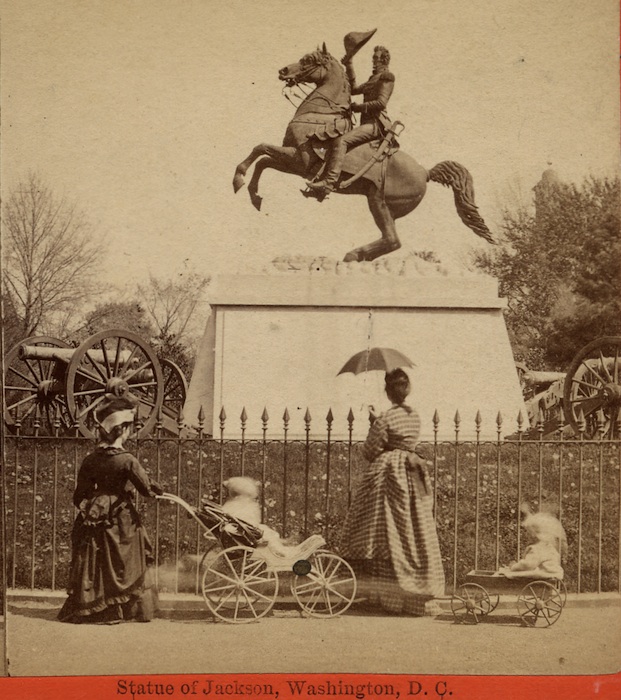 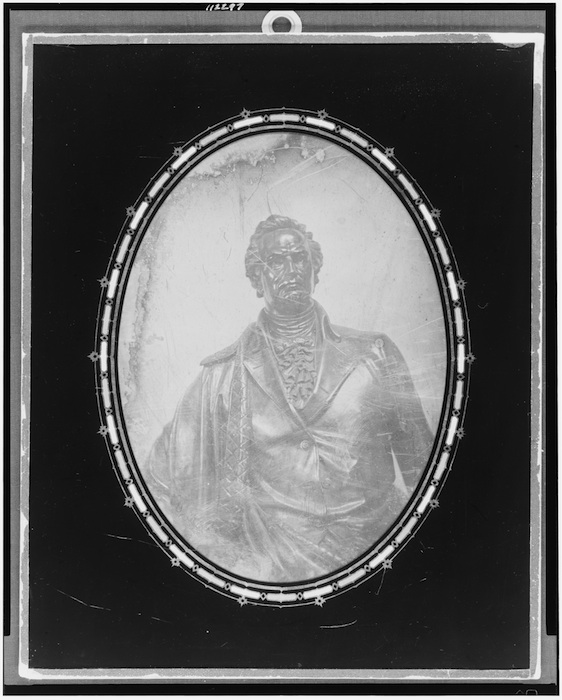 And above is our monument to De Witt Clinton at Green-Wood. It is the second oldest surviving heroic bronze cast in America. In communicating recently on another matter with Carol Johnson, the Library of Congress’s curator of photographs, she by coincidence sent me this daguerreotype of the Clinton Bronze, taken about 1855.

The Clinton Monument was an important addition to Green-Wood Cemetery. Green-Wood struggled in its first decade: the idea of a Christian, non-sectarian rural cemetery, with acres of grounds, was a break with the tradition of churchyard burial. Because the idea was new, it did not catch on right away. So, the men running Green-Wood racked their brains and came up with their best idea for attracting visitors who might become lot purchasers: they would dig up the remains of De Witt Clinton, the most revered of New Yorkers (he had been mayor, governor, U.S. Senator, and presidential candidate) who had died in 1828. Permission was obtained from Charles Clinton, De Witt’s son, and his remains were brought to Green-Wood, where they were stored in an underground vault while funds were raised and sculptor Henry Kirke Brown was hired. Oddly enough, I came across Brown’s estimate for his work in our archives just last week.

Perhaps 6 or 7 years ago, on a trip to see material then stored in a vault, I found two remarkable notes about the 1853 dedication of the Clinton Monument. One was a note from ex-President Martin Van Buren–he was sorry, or at least he claimed to be, and couldn’t make it. Apparently he and Clinton didn’t get along. And, there was a note from Edward Everett–the man who gave the dedication of Mount Auburn, America’s first rural cemetery, in 1831, and was THE MAN you wanted to speak at any rural cemetery event–it was Everett who warmed the crowd up for about two and one-half hours at Gettysburg in 1863 before Abraham Lincoln’s Gettysburg Address.

Anyway, back to the Clinton Monument itself. What is remarkable about it is the garb Clinton is wearing. Just as Greenough puzzled over how to garb Washington, and ultimately decided to show him bare-chested, Henry Kirke Brown decided to depict Clinton as a classical hero, dressed in a Roman toga, as well as the outfit of a 19th century New York. Here is De Witt Clinton, a great leader of the republic, in a combined costume he would never have worn–but depicted in this work of art as a timeless tribune of the Republic.