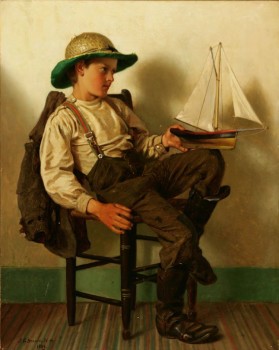 At a recent Weschler’s auction in Washington, D.C., Green-Wood’s permanent residents did very well. The top lot of the auction was “A Young Aspiring Sailor” by John George Brown (1831-1913), which soared to $192,950. A native of England, Brown studied painting there, then came to America in 1853 and settled in Brooklyn. There he continued to refine his technique and developed a specialization: sentimental paintings of street children, often newsboys and bootblacks, which earned him national fame. Brown explained his choice of subject: “I do not paint poor boys solely because the public likes them and pays me for them, but because I love the boys myself, for I was once a poor lad.” His art made him a wealthy man and he invested in New York real estate. He was elected president of the National Academy of Design in 1869 and served as vice president of the Water Color Society. During the last ten years of his life he stored many paintings in a safe deposit box, to be sold by his family after his death, when, it was hoped, prices for his work would increase. John George Brown is interred at Green-Wood in section 102, lot 10897. 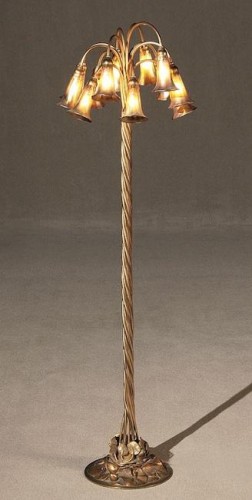 The second highest price of the auction was $43,475. That amount was paid for a Tiffany Studios favrile glass and gilt bronze 12-light “Lily” floor lamp, dating circa 1910. It is shown above. Louis Comfort Tiffany (1848-1933) was born in New York City, where his father had founded of Tiffany & Co., the famous jewelry store, Louis Comfort Tiffany grew up immersed in art and became famous for his pioneering work in stained glass.  Early on, Louis expressed no interest in the family business and focused on painting, studying with landscapist George Inness and creating landscapes, still lifes, and genre scenes. With an interest in Islam and art of the Far East, Tiffany studied Middle Eastern Art in Paris. Throughout the 1870s, he exhibited his paintings widely. By 1875, Tiffany had developed a method of putting a full range of colors into glass, and that led to fame for the windows and lamps he created. However, he did not completely forsake painting, and 1886, 1916, and 1917, he traveled West where he visited Yellowstone National Park; dramatic landscape paintings resulted. Tiffany produced a broad range of art: stained glass windows and lamps, Favrile blown glass, mosaics, jewelry, metalwork, and enamels. Though the popularity of his work waned in his later years and after his death, his work has undergone a tremendous surge in popularity. Tiffany is interred in section 65/66, lot 619.