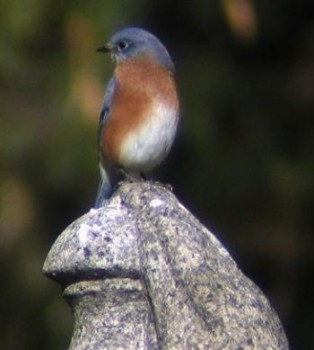 Marge Raymond and Rob Jett have been birding at Green-Wood for years. And, remarkably, after all these years, they still are making new discoveries. So, just last week, they were out birding at Green-Wood when they came across something they never before had seen there: a flock of bluebirds. Now, I know from a fifth grade project that the bluebird is New York’s official state bird. But, I must say, I had no idea that a flock of bluebirds might be flying through Green-Wood some day. As Marge notes, it is rare to see a lone bluebird at Green-Wood–in some years, none are seen. That’s one of them above from the flock of 13 birds last week. Marge checked the field notes for Green-Wood, which go back to the 1970s, and discovered that never before had a flock of bluebirds been spotted there.

Marge and Rob also spotted our male Great Horned Owl last week. Here’s the wonderful photograph that Rob took. This owl is part of a mating pair; owls mate for life. This is the only mating pair in urban New York City. They were sitting on an egg in the spring when their egg, and their nest, were blown down by a northeaster. Mating season begins in December; wish them luck.

Marge also reports that we had breeding Baltimore Orioles (no, not the losing American Leaguers) and red wing blackbirds, as well as a good migration of red and little brown bats, this year.

Great thanks to Rob Jett for allowing me to use both of his photographs here.