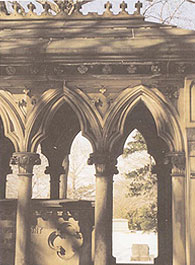 Saved in Time Estimate: $100,000 – 125,000
For cleaning and complete repointing of the brownstone structure; replication in brownstone of missing carved architectural details; water repellant treatment of roof stonework; restoration of the surrounding platform and related work (details below).

SPECIAL NOTE:
In honor of one of its founders, The Green-Wood Cemetery will match, on a one-for-one basis, all contributions made toward this preservation effort.

Henry Evelyn Pierrepont was known as the “first citizen” of Brooklyn for good reason. He, along with his father Hezekiah B. and mother Anna Maria before him, played a significant role in the planning of Brooklyn as a physical city, its crucial ferry services to New York, and the establishment of Green-Wood Cemetery itself. He is considered by some to be one of the first “city planners” in the United States, a logical evolution from his father’s status as the first important suburban (Brooklyn Heights) real-estate developer in American History. Pierrepont Street in the Heights commemorates the family to this day.

Following the incorporation of the City of Brooklyn in 1834, Henry was made Chairman of the Commission to lay out the streets of the city. The plan would include sites for eleven public parks, and set aside the hilly terminal glacial moraines above Gowanus Creek as the potential location for a large landscaped cemetery.

During his travels to France and Italy, Pierrepont was impressed with the historic cemeteries he visited. In 1832 he was to see Mount Auburn Cemetery in Cambridge, Massachusetts, outside of Boston, the first “rural” cemetery in America. These experiences would lead directly to his helping to establish Green-Wood Cemetery, which would become one of the largest and most beautiful scenic cemeteries in the world.

On the crest of a hillock site in Green-Wood stands the handsome brownstone Gothic Revival pavilion dedicated to Anna Maria Pierrepont, the matriarch of the family and Hazekieh Beers Pierrepont, its patriarch. Within the pavilion a stone sarcophagus bears their names, dates of birth, and dates of death. Anna was the daughter of the Constable Family, who in the early 19th century were the largest landowners in New York State.

The monument was designed by Richard Upjohn. His original design drawings for the structure have only recently been rediscovered. The Upjohn firm was also responsible for Green-Wood’s unique Main Entrance Gate, the Eastern Entrance Cottages and other wooden structures originally located in the Cemetery. New York City has a number of fine churches and buildings, including Trinity Church in Manhattan, designed by Richard Upjohn and Son.

The open pavilion is constructed entirely of carved brownstone, believed to be from the quarries of Belleville, New Jersey. The structure consists of five trefoil arches supported by columns on each side and one arch on each end.

Double buttressed piers form the massive corners. The all-stone hip roof overhangs a cornice containing alternating floral motifs. The roof ridge has a carved stone fleur-de-lis cresting. The entire structure is raised on a platform base and is surrounded by a stone curbed “grass terrace” integral to the design that may originally have been filled with gravel.

Surrounding the pavilion site are many gravestones of the Pierrepont Family, including brownstone, granite and marble markers.

The Pierrepont monument is basically in whole and sound condition. A number of vulnerable ornamental elements such as Gothic finials (seven of eight) on the engaged gables of the buttresses and one fleur-de-lis from the roof cresting have been lost. There is some limited scaling of brownstone surfaces. The damp, shaded environment of the pavilion and particularly its interior, has resulted in the formation of blackened crusts on some surfaces, efflorescence, and various biological growths including wasp nests. A considerable percentage of pointing is missing, much of it being on the exposed roof stones. This condition has permitted water penetration affecting the interior ceiling and other surfaces. Some evidence of early stone patching and repointing exists in areas of the masonry.

The entire brownstone structure requires gentle surface cleaning using mild detergent and low pressure rinsing techniques. All masonry jointing will be manually raked and repointed with custom mixed and tinted mortar appropriate to the stone. Missing stone ornaments will be skillfully replicated and re-installed to restore completeness to the design. Surface scaling and vintage patches appear to be of such a minor extent that they may be left untreated depending upon the visual results of cleaning. Upon adequate drying of the stone, consideration may be given to treating the roof only with a reliable water repellent to limit the degree of water penetration into the interior.

The stone curb surrounding the pavilion will be properly exposed, cleaned and pointed, and as necessary, the grade and turf (or gravel) restored to insure drainage away from the monument. This requirement will restore the proper architectural function of the “grass or gravel platform” to the Pierrepont pavilion.