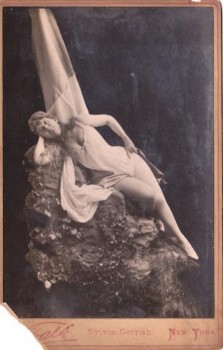 Sylvia Gerrish had quite a run. Born in California, she sang in her church choir, then came to New York City as an entertainer. According to her obituary in The New York Times, she “soon went on the stage, sang before royalty and was the toast of the town. After a while she met (Henry G.) Hilton. She completely infatuated him.” Henry gave up his wife and fortune for the fair Sylvia. Though she testified in court that she had in fact married Henry G. Hilton four days after his wife died, in 1901, that does not appear to be the case.

She died in the Hilton Mansion, on Sedgwick Avenue, a home she had clung to as her financial situation had deteriorated. Again, from the Times obituary: “After his death, Miss Gerrish fought off creditors only by constant vigilance. She never went out, and no one but her servants was admitted to the grounds surrounding the house. Last Summer, when an attempt was made to serve her with papers in a foreclosure suit, the Deputy Sheriffs had much trouble in reaching her. Savage dogs roamed the grounds to keep off intruders. They served an attachment on her in September to foreclose a mortgage on the house. She died in the same bare room in which Mr. Hilton breathed his last, at war with the world as he had been.”

Henry G. Hilton is buried at Green-Wood Cemetery in section 8, lot 11626. He joins his estranged and scandal-ridden father in that lot. For more on Henry Hilton, the father, and his scandals, take a look at my book, Brooklyn’s Green-Wood Cemetery, New York’s Buried Treasure, pages 167-168. Henry the father stole the fortune of A.T. Stewart from his widow, closed the working women’s hotel that Stewart had built (triggering a women’s boycott of the A.T. Stewart Department Store), and ordered that Joseph Seligman, a friend of President U.S. Grant’s, be barred from the hotel he owned because Seligman was Jewish–triggering another boycott. It does appear that scandal ran in the Hilton family.

The photograph above was recently added to the collections of The Green-Wood Historic Fund. Here’s another photograph of the internationally-acclaimed Sylvia Gerrish, taken early in the 20th century. For more photographs of Sylvia Gerrish, in the New York Public Library’s Digital Gallery, click here.