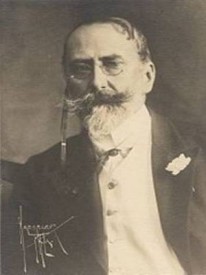 November 1, 1849: William Merritt Chase, who was, perhaps, America’s greatest painter/teacher, led the movement to enhance appreciation of American artists and opened his own New York School of Art. He went on to paint the prosperity and gentility of the new urban “leisure class,” including many scenes of Brooklyn; born in Indiana; died in 1916 in New York. Chase was quite a character, as his mustache and monacle in this photograph show. He is buried next to his wife and favorite model, Alice Gerson Chase. 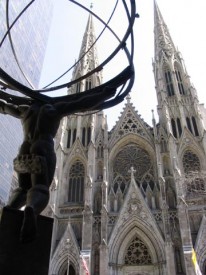 November 1, 1818: James Renwick, Jr., was the architect of Grace Church on Broadway, St. Patrick’s Cathedral on Fifth Avenue (shown above), as well as the Smithsonian Castle and the Renwick Gallery in Washington, D.C. Renwick Triangle, at the intersection of East 10th and Stuyvesant Streets in Manhattan, is named for him; born in New York City; died 1895. November 3, 1768: Hezekiah Beers Pierrepont, purchased sixty acres of the Benson, De Bevoise, and Remsen farms on Brooklyn Heights, and by 1819 had given up all other businesses to devote himself to the sale and development of the Heights as a residential community; born in New Haven, Connecticut; died in 1838 in Brooklyn. He was the father of Henry Pierrepont, the primary founder of Green-Wood Cemetery in 1838.

November 7, 1798: Silas Stringham was a naval officer who began his career during the War of 1812 and continued in the Navy until 1861, when he was summoned to Washington to serve as military consultant to President James Buchanan. He then became flag officer of the Atlantic Blockading Squadron; born in Middletown, New York; died in Brooklyn in 1876. November 11, 1831: John George Brown, born to a poor family in England, was known for his sentimental paintings of street children. He invested much of his earnings in New York real estate; born in Durham, England; died in 1913.

November 14, 1839: John N. Coyne was a Civil War hero who was awarded the Congressional Medal of Honor in 1888 for his heroism at Williamsburg, Virginia, where, on May 5, 1862, he captured a flag after a brutal hand-to-hand combat, and was wounded in action at Fair Oaks and Gettysburg; he died in 1907. His gravestone at Green-Wood is topped by a carved clover, the symbol of the Second Corps, with which he served so gallantly.

November 16, 1826: John Brooks Henderson was the U.S. Senator from Missouri who sponsored the 13th Amendment, outlawing slavery. Henderson insisted on doing so, despite his knowledge that his sponsorship would likely end his political career; indeed, he never again was elected to political office. Henderson was born near Danville, Virginia and died in 1913. November 23, 1807: James Smillie was an artist whose engravings illustrated the early histories of Green-Wood; born in Edinburgh, Scotland; died in Poughkeepsie, New York, in 1885. Here’s one of his images from 1847 of Green-Wood; it is Lawn-Girt Hill. Notice the vegetation he uses to frame the image; much of that was likely just an artists device. November 25, 1757: Henry Brockholst Livingston served in the Continental Army during the Revolutionary War as a captain. Promoted to major, he served as an aide to Generals Schuyler and St. Clair, was at the siege of Fort Ticonderoga, and was on General Benedict Arnold’s staff during the Saratoga campaign, witnessing General Burgoyne’s surrender. In 1779, Livingston left the service and went to Spain as secretary to his brother-in-law John Jay, the minister to that country. Livingston was captured and imprisoned by the British during the Revolutionary War. He later served as an Associate Justice of the United States Supreme Court; born in New York City; died in 1823 in Washington, D.C.

November 28, 1831: John Mackay made a huge fortune in Nevada’s Bonanza Mines of the Comstock Lode. During his lifetime he gave away $9 million to men who approached him man-to-man and asked him for “loans” which they never repaid; born in Dublin, Ireland; died in London in 1902.