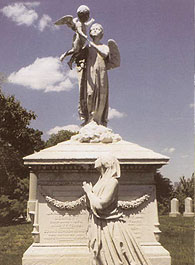 Saved in Time Estimate: $75,000
For cleaning, repointing and consolidation treatment of marble components; re-creation and installation of “weathered” replacement sculptural elements; and related work (details below).

Born in Scotland and brought to America as a youngster, James Gordon Bennett Sr. entered the world of newspapers in New York, and founded The New York Herald in 1835. He ran the paper personally until his retirement in 1867. His newspaper was to grow into the most influential and controversial paper in America and had the largest circulation in the world despite its reputation. Among contemporary newspapers it was known to print “fictitious news, sensational opinions, reckless personal attacks,” and had a largely “disrespectful tone.” To say the least, Bennett was not always welcome in polite society in New York City.

The Herald would continue into the 20th century under the leadership of James Gordon Bennett Jr. who took over from his father, and was its publisher until his death in 1918. In 1924 the paper merged with its long time competitor, Horace Greeley’s New York Tribune, becoming the New York Herald Tribune, which ceased publication in 1966. The present day International Herald Tribune was originated in 1887 as the Paris Edition of the New York Herald.

Bennett Sr.’s monument reflects a seemingly unimaginable personal and poignant aspect of the man’s existence considering the demeanor of his public image.

The Bennett memorial was made in Italy entirely from the finest (Carrara) white marble, and is composed of a principal pedestal supporting a statue of a winged female angel releasing a winged child toward the heavens. On a separate granite plinth and marble base set before the monument is a statue of a woman kneeling on a pillow in prayer. She presumably depicts the mother praying for her deceased child and infant.

The pedestal is set on a granite plinth now flush with the grade. The marble pedestal consists of a sub-base, carved base, inscribed and ornamented die, capstone with carved cornice and top formed as a hip roof supporting the statue group. The die bears raised block lettering inscriptions for JAMES GORDON BENNETT, ELEANOR CREAN, a child COSMO GORDON BENNETT who died at less than six years of age, and an infant CLEMENTINE BENNETT who died at only three months old. The monument die is further decorated with finely carved floral festoons, inverted torches on the corners, and running bead moldings.

The Bennett Family Plot is approached from Fern Avenue by a set of four gray granite steps with volute shaped stringers leading to a granite slab set at the grade, inscribed JAMES GORDON BENNETT FAMILY VAULT. The slab has two recessed bronze lifting rings. No other headstones or markers exist within the plot.

The Bennett monument is suffering from advanced marble deterioration due to approximately 150 years of exposure to severe urban environmental conditions, including acid rain. The surfaces of the pedestals and sculpture are actually dissolving. The originally crisp lettering and ornament, sharp arrises of the architectural elements, and delicate modeled detail of the statuary have been most seriously affected.

Marble disintegration of the statuary has resulted in the loss of the Angel’s wingtip, fingers and facial features. Similarly, due to its diminutive size, the Infant Angel has lost its fingers and toes and facial detail, and is threatened with more extensive structural failure in the near term. The statue of the Woman Praying has lost all of its fingers, and the facial features appear to have “melted away.” Surface losses amount to 1/8 to 3/16 inch in depth, exposing the marble grain and opening the veins of the stone, creating hairline cracks in the material throughout the monument.

Jointing between stones is open, permitting greater penetration of water into the marble. Biological growths and stains exist in the shaded recesses, but have been somewhat restrained because the monument is in an open area and is exposed constantly to direct sunlight.

Conservation of this monument challenges our willingness to intervene in the inevitable process of deterioration found in outdoor marbles. Nonetheless, something must be done to stabilize the material integrity of the existing work by inhibiting the erosion. Additional steps are required to preserve the monument’s intrinsic beauty and memorial intent by restoring its “wholeness” and esthetic legibility. While it can be said that the massive elements of the monument are “whole and sound,” this is not true of the surfaces, detail and small sculptural elements. It is these fine areas that give the piece its artistic quality and character. The charm and spirit of the monument’s aged appearance is rapidly giving way to what may become a disturbing, even grotesque, fragment of the original.

The Bennett monument requires gentle manual cleaning using chemical and water rinsing methods to remove biological accretions and stains from the marble and granite components. All of the marble, including architectural and sculptural elements, shall be treated with an appropriate consolidant chosen to inhibit surface disintegration and not visually alter the appearance of the stone. Jointing between stones shall be manually raked where necessary and repointed using a custom-mixed white mortar. The work is designed to stabilize the material aspects of the historic monument.

Consideration will be given to the partial replacement of severely deteriorated sculptural elements, particularly the hands of the Woman Praying, the proper left wingtip and arm of the Angel, and the hands and proper left wingtip of the Infant Angel. The objective of this selective restoration is to recreate a “sense of wholeness” for the three figures, not to replicate the original sculptural appearance of the various elements. What is imagined is that the replacement parts, reinforcements and repairs would restore the statues to an aged and weathered appearance they would have had — say 50 years ago.

The replacement elements may be castings made of lightweight, reinforced, composite material blended to match the old marble as closely as possible. Appropriate non-metallic anchor rods would be devised to secure the new members.

No resurfacing or recarving of the existing marble components is anticipated at this time.

Regrading and turf restoration is required to expose the two granite plinths of the monument that are virtually at grade. This measure is recommended to improve both the visual appearance of the monument and restore positive drainage away from the masonry. Similarly, the grade and turf around the Family Vault granite slab needs to be raised in order to cover the exposed masonry footing.