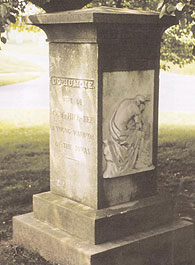 Do-Hum-Me was the eighteen-year-old daughter of Nan-Nouce-Push-Ee-Toe, a chief of the Sac and Fox Nation* who traveled east in 1843 from their native lands in Iowa to participate in treaty negotiations with the federal government. The occasion resulted in her meeting and marrying Cow-Hick-Kee, a young warrior, who also participated in the sessions.

The delegation later visited New York City, where the presence of Native Americans was met with great excitement and quickly attracted the attention of showman P. T. Barnum. His American Museum was located in lower Manhattan at the corner of Broadway and Ann Street across from St. Paul’s Chapel. Recognizing the potential for increased ticket sales, Barnum persuaded fifteen members of the delegation, including Do-Hum-Me and Cow-Hick-Kee, to perform daily war dances and wedding ceremonies for museum goers. Tragically, Do-Hum-Me, known to New Yorkers as the “Indian Princess,” died five weeks after her wedding date. Without immunity to the diseases brought to America by immigrant Europeans, she succumbed to the fate that ultimately befell millions of indigenous people. Do-Hum-Me died inside Barnum’s Museum. Barnum was to record that her grieving father and young husband cooked food and ritually placed it on the roof of the museum so that Do-Hum-Me’s spirit would not go hungry as long as her Native American brethren remained at the site.

The monument to Do-Hum-Me consists of a white marble base, die and capital supported on a granite plinth. The marble is a coarse grained material that appears to be the widely used Tuckahoe marble quarried in Westchester. Set in the face of the die is a bas relief plaque depicting a Native American male in mourning. The work was created by Robert Launitz, a Russian-born artist, trained in his homeland and in Rome, who came to New York in 1828. Launitz was the partner of John Frazee in their New York City-based marble works, producing architectural stonework, monuments and statues.

The burial plot was once surrounded by a simply decorated wrought-iron fence which was removed years ago.

The Do-Hum-Me monument is in whole condition, but has suffered from years of exposure resulting in “sugaring” of the architectural and sculptural marble elements. The carved inscriptions on three sides of the shaft remain clear and legible, despite the presence of biological growths and soiling. The work stands adjacent to Sylvan Water and is mostly shaded by a large tree, two factors which contribute to the formation of mosses, algae and other growths. Jointing between stones is open and exposed to water infiltration. Minor chipping of the marble is evident in several places on the stonework, and the bas relief shows some open veining at the top and general surface erosion, due to weathering and biological habitation.

Sitework is limited to restoration of the grass turf that is affected by the dense shade predominating in the vicinity of the monument.

*The term “Sac and Fox Nation” is an English transliteration, or corruption, of Thâkîwaki (“people coming forth from the water”) and Meskwâki (“people of the red earth”) first used by the U.S. government during treaty negotiations in 1804.