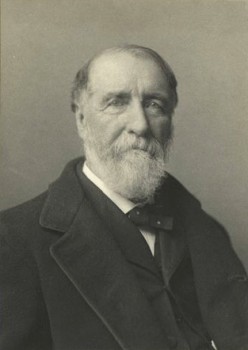 No man did more to popularize baseball than Henry Chadwick. A British-born newspaperman, Chadwick immigrated to America as a youth, and made Brooklyn his home. In 1847, at Elysian Fields in New Jersey, Chadwick played his first baseball game, then dedicated the rest of his life to the promotion of the sport which he helped to become the national pastime. . . . He persuaded The New York Times and other dailies that baseball was news fit to print, and became the country’s first baseball editor, working at the New York Clipper and then the Brooklyn Eagle for the next half-century.

Chadwick assigned numbers to each of the positions in the field to create the baseball scoring system that is still in use today and introduced the newspaper box score, a statistical summary by which the performance of players could be compared. He coined many of baseball’s most-enduring phrases, including “assist,” base hit,” “base on balls,” “cut off,” “chin music,” “fungo,” “white wash,” “double play,” “error,” “goose egg,” “left on base,” and “single.” He also edited and published baseball guides and yearbooks, chaired the Rules Committee of the National Association of Base Ball Players, and supervised the annual game, at the beginning of every baseball season, at Brooklyn’s Capitoline Grounds, where rules changes were demonstrated.

Though suffering from a fever, Chadwick attended opening day of the 1908 baseball season at the Polo Grounds. Pneumonia soon set in, and on April 20, 1908, Chadwick lay unconscious in his bed. When he regained consciousness, he asked which team had won the game that day between his beloved Brooklyn team and the New York Giants. Told that the Giants had won, Chadwick expressed his regrets and lapsed into an unconsciousness from which he never emerged.

It was President Theodore Roosevelt who honored Chadwick, in 1904, as the “Father of Baseball.” In 1938, Henry Chadwick was elected to the Baseball Hall of Fame. His plaque at Cooperstown reads, “Baseball’s preeminent pioneer, writer for half a century, inventor of the box score, author of the first rule-book in 1858, chairman of rules committee in first nationwide baseball organization.”

Chadwick’s monument at Green-Wood Cemetery was paid for by contributions made to a committee chaired by that other great Brooklyn baseball man, Charles Ebbetts. . . . The four corners of his lot are marked by stones carved to look like bases. Attached to the central monument are bronze version of a catcher’s mask, a baseball glove, and crossed bats. It is topped by a granite sphere carved to look like a baseball. . . . Appropriately, Ebbetts is buried on a nearby hillside.