Just back from Gettysburg, Pennsylvania. I attended the Center for Civil War Photography’s annual seminar. It was just a great experience–Garry Adelman and Tim Smith, who led the three days, did an incredible job. We spent three full days on the battlefield, the mecca for Civil War buffs, at the places where photographs of the dead and carnage from the battle were photographed just days after the battle.

In those rare moments of free time, I went out to get photographs pertaining to the Civil War veterans who are interred at Green-Wood and who fought at Gettyburg. Above is the monument to Major General Henry Warner Slocum, who commanded the Union troops up on Culp’s Hill. Slocum as been widely criticized for his performance at Gettysburg–he is often referred to as Slowcome, allegedly for the slowness with which he moved the men of his corps forward. However, new research published in the July issue of The Gettysburg Magazine by Robert Himmer seems to refute this criticism. 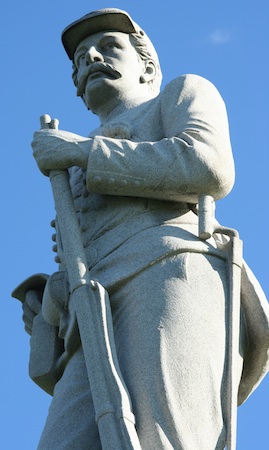 Here’s a detail of the monument to Brooklyn’s own 14th Regiment, and the seal of the City of Brooklyn (the third largest city in the Union during the Civil War). The 14th saw heavy fighting at the Railroad Cut; Sergeant Nathaniel Carlton was shot in the arm there, had his arm amputated, and died from his wound. He is interred in the Civil War Soldiers’ Lot at Green-Wood. 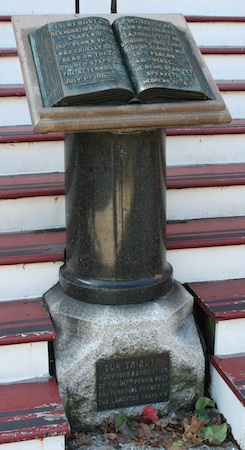 This, to my mind, is one of the most poignant monuments at Gettysburg. It honors the Reverend Horatio Howell, Chaplain on the 90th Pennsylvania Infantry. This monument stands at the bottom of the stairs of the Lutheran Church in Gettysburg. On July 1, 1863, the first day of the three-day battle, the church was being used to treat the wounded. Chaplain Howell, after consoling the wounded, emerged from the church and was gunned down by a Confederate on the church steps. The men of the 90th Pennsylvania erected this monument in his memory. 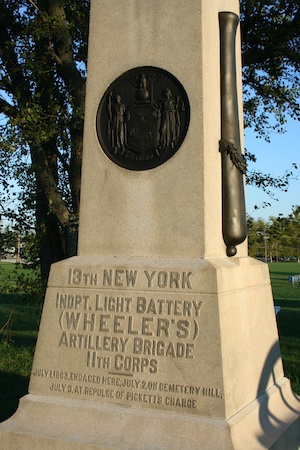 To my mind, Captain William Wheeler of Wheeler’s Battery, the 13th Independent New York Battery, is an extraordinary story. Wheeler graduated from Yale, class of 1855, and became the class secretary. He studied law at Harvard and in Germany. When the Civil War began, he volunteered, despite protests from his mother, telling her that, as a Republican abolitionist, he could not leave the fight to the Democrats. Wheeler was a great writer-his letters are just a pleasure to read. When he was disappointed at the level of writing of the 100 or so men who served under him, he did something about it, setting up a school for his charges to teach them how to write. Here is the monument to Wheeler’s Battery at Gettysburg.

One of the big names at Gettysburg is General Daniel Sickles. Sickles was a tremendously controversial man who led a fascinating life. Though he is interred at Arlington National Cemetery, his wife and in-laws are interred in unmarked graves at Green-Wood. Sickles raised New York’s Excelsior Brigade. He commanded a corps at Gettysburg and, despite orders to the contrary, moved that corps off of Cemetery Ridge and out into the Peach Orchard, causing all sorts of problems for the Union forces. Here’s the monument for the Second Fire Zouaves of the Excelsior Brigade. 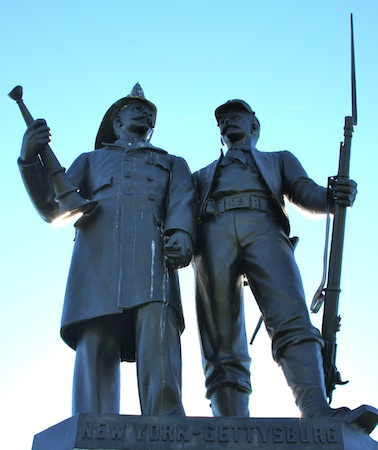 They were commanded by Colonel William Brewster, who is at Green-Wood.

There are other Green-Wood permanent residents who fought at Gettysburg: Lieutenant Colonel Caspar Trepp of the United States Sharpshooters, Colonel Charles Wainwright, the artillery commander for whom Wainwright Avenue on the battlefield is named, 18 men who fought and died for the Union at Gettyburg, and many more.

If you would like to read more about these men, and their fascinating stories, you may buy my book, Final Camping Ground: Civil War Veteran’s At Brooklyn’s Green-Wood Cemetery, In Their Own Words, by clicking here, or our Civil War Project’s biographical dictionary on cd, with 4,500 biographies and hundreds of photographs of men who served in the Civil War (including 75 Confederates), by clicking here.

1 thought on “Green-Wood At Gettysburg”