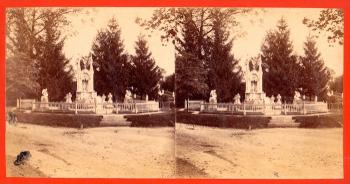 Friday morning I entered the cemetery at the Fort Hamilton Parkway entrance, and walked across Green-Wood to our offices. It was drizzling, good cemetery weather, and it was a treat to wander the quiet grounds. As I got near the Catacombs, I reached the grave of Edward Anthony. Now, I know he is a rather obscure individual–few people ever have heard his name. But he was an important man, a man who contribued something to the world. I have, in my library, a book: Anthony: The Man, The Company, the Cameras; An American Photographic Pioneer, by William and Estelle Marder. It tells Edward Anthony’s story: pioneer photographer (he was taught photography in 1840 by none other than Samuel F. B. Morse; yes, that Samuel F. B. Morse, the inventor of Morse Code and the telegraph), just a year after Louis Daguerre had introduced his daguerrian photography to the world. 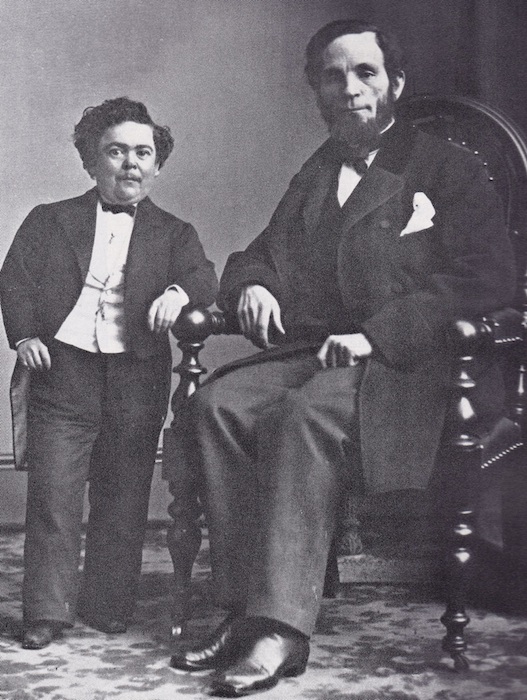 Here’s Edward Anthony on the right; Tom Thumb, the famous 19th century character, is at left. Anthony worked as an engineer with his brother Henry on the Croton Aqueduct (supplying fresh water to New York City), pioneered the use of photography to settle a border dispute with Canada, and went into business selling photographs and photographic supplies. He and his brother pioneered “instantaneous” photographs in the early 1860’s–by making advances in chemicals they were able to reduce shutter speeds, thereby allowing photographers to freeze the action on New York City’s streets, so that an instant in time could be captured for posterity in a photograph. The firm of E. and H.T. Anthony became the largest purveyor of photographs: they sold approximately 7,000 different stereoviews, those side by side images that, viewed with the proper apparatus, could be seen in 3D, as well as other types of images. The Anthony firm was also the largest manufacturer of cameras, photographic equipment, and chemicals, in the world. The famous photograper Mathew Brady bought his supplies from them; when he could not pay his bills, the Anthonys wound up owning his negatives, and selling the prints that they made from them. In fact, the Anthonys were so dominant that, about 30 years ago, I researched other publishers of stereoviews of New York City, and wrote an article entitled “It Wasn’t Just the Anthonys . . .” which was published in Stereo World, the publication of the National Stereoscopic Associaton.

Above is one of the Anthony’s stereoviews. Dating from about 1870, it is labelled on the back: “Greenwood Cemetery: Monument of Miss Charlotte Canda, Battle Avenue.” The Anthonys published hundreds of images of Green-Wood. So, it is not surprising, given this interest, that Edward Anthony chose to be interred, with his wife, at Green-Wood. 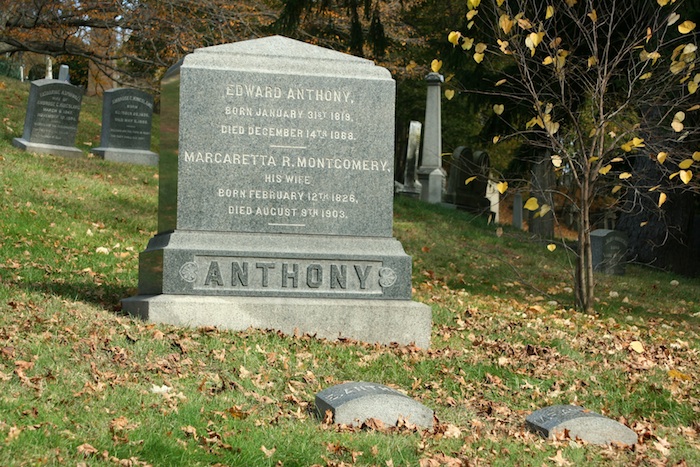 Now, back to Friday. As I walked through the drizzle, and neared the Catacombs, I stopped at Edward Anthony’s grave. Here it is. He has a good-sized granite marker with his name and life dates on it and an smaller stone with “E. Anthony” carved into it. However, nothing identifies who this man was. I noticed that the corner marker on the Anthony lot was covered with grass, so I cleared the grass off of it: ANTHONY is now clearly visible there also. 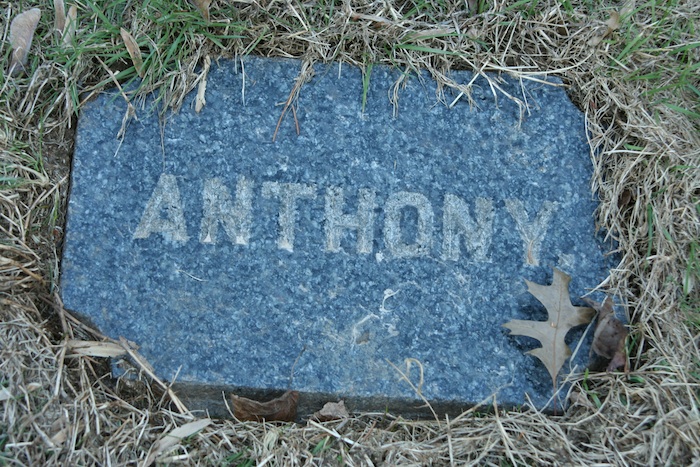 As I stood there, I knew I would be leaving the next day for Washington, D.C., for an annual antique photo show that I have been attending for years. And I wanted Edward Anthony to know that, more than a century after his death, he was not forgotten. So, there I was, in the drizzle, telling him out loud that I would soon be off to Washington, where dealers and collectors of 19th century photographs would be gathering, and that there the photographs that he and his brother published so long ago would be bought and sold.

Might he have imagined such a scene? I’m sure he could hardly imagine our world, but I am sure he would be very proud to know that people still gather to trade the photographs that he published! And, that he is not forgotten!!

By the way, I bought the Anthony stereoview of the Charlotte Canda monument that you see above, as well as other Anthony views of Green-Wood, at the photo show this past weekend.