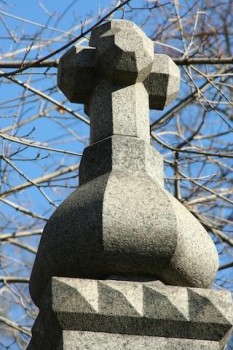 Art Presson, Green-Wood Cemetery’s superintendent of the grounds, is a jack of all trades. Trained as a horiculturist, he designs gardens and plantings. He is in charge of the grounds crew, figuring out what has to be done and assigning workers to do it. He is responsible for selecting sites for new trees and determining which diseased trees must be cut down.

Recently Art was supervising a crew in the removal of a horse chestnut. As is his habit, he was walking the surrounding area, checking things out. And, as he did so, he noticed a large and heavy stylized granite cross on the ground in the Andrews Family lot. Looking around, and trying to figure out how it had gotten there, he concluded that freezing and thawing, plus the striking by branches from nearby trees against the cross, had resulted in its toppling from the top of a granite shaft.

It appears that the original design had simply been to slide this cross down into the top of the shaft. Well, this very interesting cross is now back on top, in it intended place. It took two workers, lifted up by a bucket truck, to place the cross back in its place. And it looks pretty good up there, don’t you think? This monument is a very nice design–pretty unusual.

Above is a closeup of the cross. There it is, back on top. 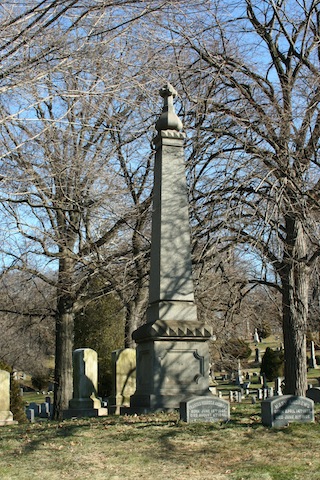 Don’t worry–the branches that may have caused the heaved cross to topple have been pruned back, so that they won’t be hitting it again.