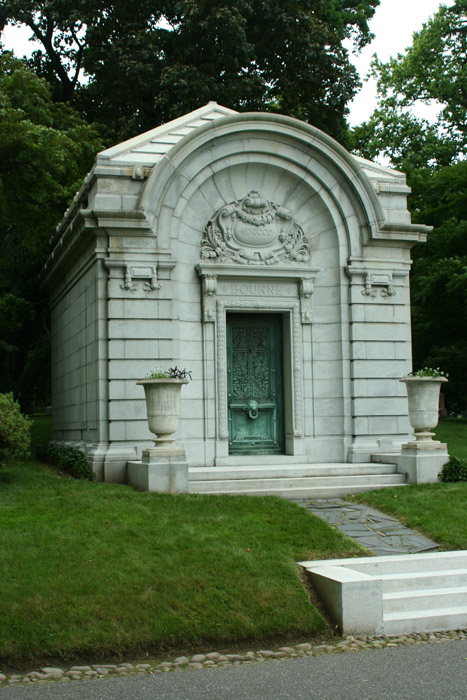 A couple of months ago, I did a cemetery tour for the Bayport Heritage Association. It was quite an interesting experience with a very enthusiastic group. One of the pleasures of doing tours for such groups is my opportunity to learn from them. Though I’ve been doing tours of Green-Wood since 1990, I can only fit so much into my brain. And there is so much to discover at Green-Wood: we have 561,000 people interred there, each with a story. As I prepared for the tour, I met Richard Martin. Richard had made a few visits Green-Wood to research his family’s history, and had had trouble finding the grave of one of his ancestors. I was game to help, particularly because the ancestor he was trying to locate was a Civil War veteran (in case you don’t know, I’ve been leading the Green-Wood Historic Fund’s Civil War Project since 2002; though we’ve found an amazing 4,200 Civil War veterans at Green-Wood, we can always use one more).

It turned out that Richard is the Director of Historic Services for Suffolk County Parks. Richard planned to come along on the Bayport trip to Green-Wood, and he had a few ideas about some stops to include in the tour. First of all, Richard showed me a photograph of one of the most spectacular tombs at Green-Wood. He asked me if I knew where it was; I did, but that was all I knew about it. We drove over and took a look. Richard told me Frederick Bourne (1851-1919), whose last name appeared above the door, had been president of the Singer Sewing Machine Company. Well, that was fascinating! I went home and that night determined to find out more about Frederick Bourne. It turns out he was a real success story–working his way up in the company until he was in charge. Bourne became a man of tremendous wealth–he had an estate built in Oakdale, on Long Island, Indian Neck Hall, that was designed by architect Ernest Flagg and completed in 1900. Ultimately, this estate stretched across almost 2,000 acres. Today the estate is home to the Charles R. Dominy County Park , Suffolk County Golf Course and the Long Island Maritime Museum . And, it turned out, that was not Bourne’s only connection with Flagg. Bourne had another estate upstate, in the Thousand Islands area of the St. Lawrence River. He owned an island there on which he had Dark Island, at a cost of half a million dollars (when that was real money) built by none other than architect Ernest Flagg. And, it turns out, one of the most spectacular skyscrapers ever built was designed by Flagg for Bourne: the Singer Building (torn down in 1967, one of the most horrendous of demolition atrocities ever in Manhattan). The Singer Building, now sadly destroyed, but in its time one of New York’s great skyscrapers. 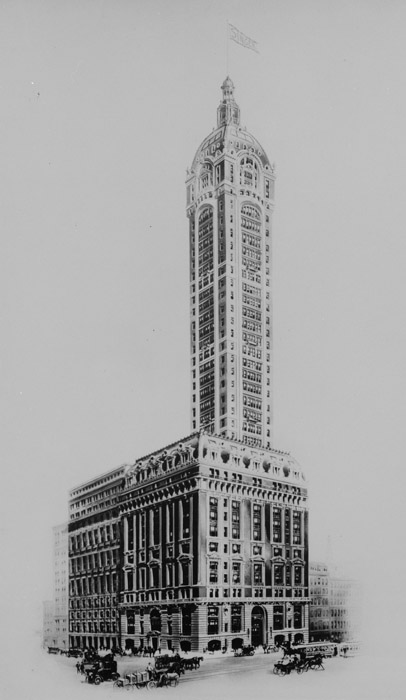 Well, it occurred to me, if Bourne had hired Flagg to design these three buildings for him, Bourne might also have hired Flagg to design his tomb at Green-Wood. When I made it back to Green-Wood, I headed for the office of our surveyor, Kestutis Demereckas (“Kostas”). Over the years, Kostas has gathered records and blueprints of the cemetery. Might he have a blueprint of the Bourne Tomb with Flagg’s name on it? It certainly was worth a try. I checked with Kostas, who checked his list of blueprints–nothing for that lot. So I left his office and went downstairs, hoping to find something in our files with “Flagg” on it. As I looked, Kostas appeared; he had found another list, and that one had the Bourne lot number on it–there was a blueprint in his drawer. In his excitement, Kostas hadn’t looked. So we both headed right upstairs; Kostas opened his drawer and took out the file. When he opened it, there was the blueprint, with “Ernest Flagg, Architect,” written on it. Eureka! Here’s Kostas holding the blueprints. 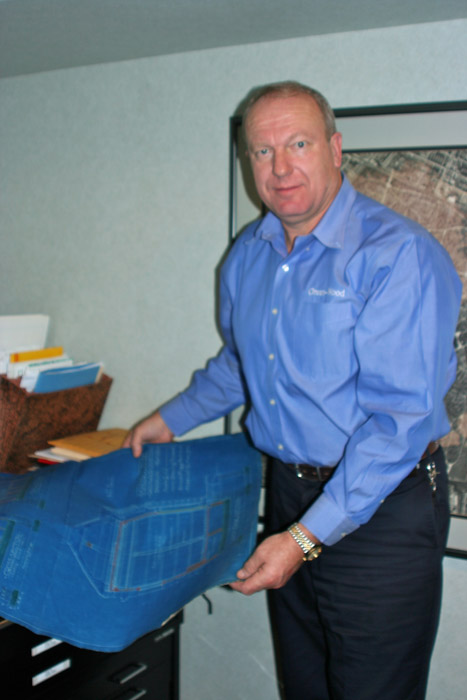 Richard had also suggested that I include a stop at the Roosevelt family lot at Green-Wood. This is President Theodore Roosevelt’s family; though T.R. is interred out near his home, Sagamore Hill, in Oyster Bay on Long Island, many of his family members, including his mother, father, first wife, uncles, aunts, and cousin are in this lot. Richard suggested we show the group John Ellis Roosevelt’s gravestone; several of the volunteers who would be in the tour were volunteers at historic Meadow Croft, Roosevelt’s country estate in Sayville, on Long Island. Meadow Croft was built in 1891 as the country estate of John Ellis Roosevelt (1853-1939), a cousin of President Theodore Roosevelt. 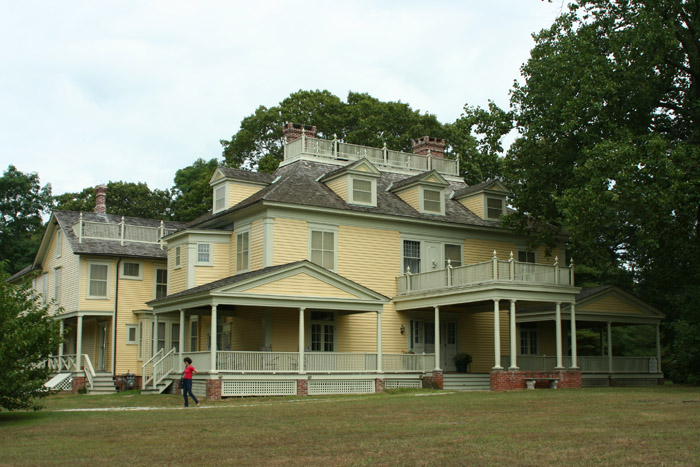 John was a lawyer, investment banker, and sportsman. Well, Meadow Croft sounded interesting, so last Sunday I headed off with a friend for a visit to Sayville, where it’s located. The house was pretty impressive from the outside. As we signed in, Brooklyn came up in the conversation, and the volunteer at the door said that she had recently been to Brooklyn–for a great tour of Green-Wood Cemetery. It was, by her account, led by someone by the name of Jeff Richman! Well, I couldn’t remain undercover any longer–I confessed that I was that very same Jeff Richman. She was impressed, I think, and immediately introduced me to one of the tour guides, who, it turns out, also had been on the Green-wood tour. Meadow Croft was very interesting–well worth the visit. It is along Browns Creek and faces south, towards the Great South Bay. Quite a location! Its neighbor is St. Anne’s Church–chock full of Tiffany windows. And, of course, Louis Comfort Tiffany also is one of Green-Wood Cemetery’s permanent residents.