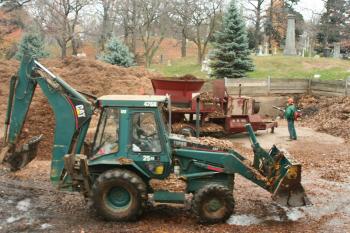 Green-Wood’s 478 acres are home to 7000 trees. And, as you may have guessed, those trees produce millions and millions of leaves. For the last few years, it has been the practice at Green-Wood, in the fall, to mow most of those leaves in place as a mulch. But, because that has resulted in a rather thick carpet in some places, a new technique is being tried this year. Leaves are being blown and raked to the nearby roads, then picked up in trucks and brought to a central composting area. There they are watered down (which seems to improve the process of cutting them up), moved with a heavy front end loader to a tub grinder, and cut up. They are then placed in large piles, where, with several turnings, they will decay over the upcoming months into a fine mulch for use in enriching the soil across the cemetery grounds.